European shares rise as earnings roll in while PTSB tanks 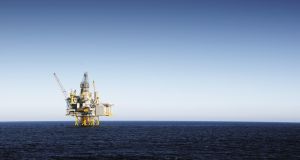 The pan-European Stoxx 600 ended up 0.5 per cent, broadly in line with euro zone stocks and blue-chips, as oil and gas shares gained 0.8 per cent and autos climbed 0.6 per cent.

Wall Street got a big boost from strong corporate earnings early in the day, with all three major indexes hitting record highs, while investors awaited the outcome of a two-day Federal Reserve meeting.

Permanent TSB was the biggest faller of the day in Dublin, declining 14 per cent to €2.15 after it announced first-half results.

Analysts said the sharp fall in share price was a little surprising given that the results were in line with expectations. However, the bank’s plan to deal with non-performing loans was not well received by investors.

CRH outperformed despite negative headlines overnight from the US with highway construction projects down 20 per cent year-on-year. The stock closed up 1 per cent to €30.55.

Cairn, which made its debut on the Iseq on Wednesday slightly underperformed with more than a million shares traded. It ended up 0.6 per cent to €1.63.

It was a mixed bag for other real estate stocks with Hibernia and Ires both off on the day.

Airlines across Europe performed strongly with Ryanair bouncing back from a big sell-off earlier in the week to close up 1 per cent to €18.30.

Company earnings were front and centre of the market action as shares in ITV jumped 2.4 per cent after the broadcaster reported first half earnings, adding it expected advertising pressure to ease in the third quarter.

Results also buoyed shares in catering firm Compass Group , which rose 1.8 per cent after reporting a 3.9 per cent rise in quarterly revenue thanks to strength in its US market. Consumer stocks were among the top risers, with British American Tobacco, AB Foods and Diageo all helping underpin gains.

Irish-founded Tullow Oil rose 7.9 per cent after higher output from new fields helped sales at the Africa-focused oil producer rise 46 per cent in the first half, though it also reported impairment charges due to low oil prices.

Peugeot maker PSA Group jumped 3.2 per cent, leading carmakers higher after the firm hit a new profitability record, beating analyst expectations with an increase in sales for the first half.

UniCredit fell 0.4 per cent after it said it had suffered a cyber attack giving unauthorised access to Italian clients’ data.

Boeing surged 8.3 per cent to an all-time high in early trading, while AT&T gained 5 per cent, after the two companies posted higher-than-expected quarterly profit.

Amazon rose 1 per cent to a record high and its market cap surpassed $500 billion. The stock was among the top boosts to the S&P and the Nasdaq.

General Dynamics dropped 4.5 per cent after the maker of jets, tanks and US Navy ships said it expects lower profit margins in the second half of 2017.

Amgen was down 2.9 per cent after the biotechnology company’s sales for an infection fighter drug came in below expectations. The stock was the top drag on both the S&P and the Nasdaq.

1 Belgium helps Ireland to a Brexit boon
2 ‘My rent here is so low it’s a joke’
3 Can Grafton Street stop the flood of closures?
4 This charming man: how Paschal Donohoe won the Eurogroup presidency
5 New Powerscourt Springs hotel to open in defiance of virus gloom
6 ‘Sad day’ for House of Ireland as tourism retailer goes out of business
7 Income tax receipts prove remarkably resilient to coronavirus
8 Paschal Donohoe’s election as Eurogroup president ‘a great win for Ireland’, says Taoiseach
9 Goodbody’s planned €155m sale to Bank of China falls through
10 Goodbody loses a second suitor as Bank of China deal falls through
Real news has value SUBSCRIBE