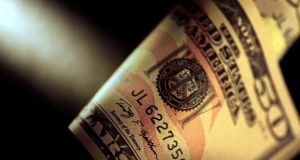 The falling value of the dollar is a negative for US tourists arriving in Ireland at peak season and also for Irish indigenous exporters to the US market.

The US dollar has taken a sharp drop on the markets with serious problems in president Trump’s healthcare reform plan adding to doubts about the administration’s ability to follow its wider economic policy agenda. This is good news for those heading to the US for their holidays, though it will cut the buying power of US tourists visiting our shores and also make life harder for Irish exporters to the US.

Against the euro , the US currency fell to over $1.1550 late on Tuesday, its lowest since May of last year. With the Republicans abandoning plans to agree a replacement for Obamacare, serious doubts are growing among investors about Trump’s wider economic strategy.

The sharp rise in the US dollar immediately after his election – part of the so-called “ Trump trade” – was based in part on a view that his plans to cut taxes for companies and individuals would boost the economy and increase growth. Now, whether Trump can get political support for his tax-cutting agenda is increasingly being called into question, with the Republican party in some chaos over the healthcare reforms. In response, the dollar has reversed course.

Investors are also increasingly concerned about the lacklustre rate of US economic growth and inflation, with retail sales and consumer price figures last Friday coming in weaker than anticipated. The inflation rate fell from 1.9 per cent in May to 1.6 per cent in June and retail sales fell unexpectedly last month.

Speculation that weaker economic and inflation data will delay the next rise in US interest rates, which had been expected in September, until later in the year has contributed to pressure on the US currency. Higher US interest rates increased the return to investors holding US dollars. US government bond interest rates have also fallen back, anticipating a slower than expected upward move in inflation.

An index which measures the value of the US dollar against a range of other currencies rose to a high of just under 104 in January of this year. It was under 95 on Wednesday, a drop of some 9 per cent, showing the widespread weakness of the US currency.

The dollar drop is a boost to those heading Stateside on holidays, provided they did not buy their supplies of the US currency earlier in the year. The strong run of the US currency after the election result led to it approaching parity with the euro in December, when one euro bought less than one dollar and four cent at one stage. Now with the euro gaining some 0.6 per cent on Tuesday morning alone to not far off $1.16, the rate now above where it was in advance of the US election.

The falling value of the dollar is a negative for US tourists arriving in Ireland at peak season and also for Irish indigenous exporters to the US market. Enterprise Ireland figures show that the US and Canadian markets account for over 17 per cent of exports from its companies. Multinationals exporting from Ireland to the US would generally be less exposed as they would do most of their trade in dollars.