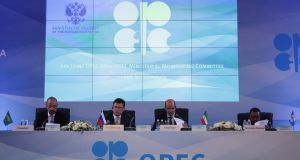 Oil rallied on Monday, erasing early losses after leading OPEC producer Saudi Arabia pledged to cut its exports to help speed up the rebalancing of global supply and demand.

“This is the Saudis saying they view the current market conditions as too weak and they are actually delivering,” SEB commodity strategist Bjarne Schieldrop said.

“It shows real additional willing on their part to do something, which is hugely important, rather than sitting back and letting OPEC motions roll forward. They’re acting unilaterally and adding pressure.”

Falih also said the Organization of the Petroleum Exporting Countries and their non-OPEC partners were committed to extending their existing 1.8-million bpd supply reduction deal beyond next March if necessary, but would demand that any non-compliant nations stick to the agreement.

OPEC and some of its competitors met in the Russian city of St Petersburg to review market conditions and examine proposals related to their pact to cut output.

There was no discussion of deeper oil output cuts, but Falih said Nigeria, which is exempt from the deal, had signalled it was ready to cap its output at about 1.8 million bpd.

Nigeria and Libya have been exempt from the cuts to help their industries recover from years of unrest.

“Al-Falih is striking an optimistic tone today by also saying ‘it is only a matter of time before inventories return to 5-year average’, the question for the market is how long?,” BNP Paribas head of commodity strategy Harry Tchilinguirian told the Reuters Global Oil Forum.

“With patience already being tested, a slow re-balancing of the market is unlikely to invite strong buying interest, and could lead to the early unravelling of potential summer price gains.”

OPEC and some non-OPEC states including Russia agreed to cut production by 1.8 million barrels per day (bpd) from January 2017 to the end of March 2018.

Russian energy minister Alexander Novak said the output deal had helped to clear 350 million barrels of additional supply from the market so far this year.