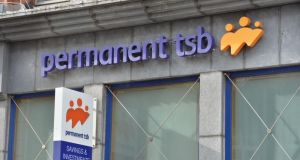 Permanent TSB Group climbed 2.25% to €2.50 in Dublin, making it the best performer amongst the banks

European shares rose as miners and banks gained ground on Tuesday, while solid updates from a number of companies lifted investors’ confidence.

Home lender Permanent TSB Group, which is due to publish results on Wednesday, climbed 2.25 per cent to €2.50, making it the best performer amongst the banks, all of which gained ground as bond yields rose.

Low-cost airline Ryanair enjoyed a good day, recovering ground lost after it reported first quarter results on Monday. Analysts at HSBC published a note recommending the carrier as a buy. Its stock gained 1.54 per cent to €18.12.

Another index heavyweight, building materials giant CRH, rose 1.51 per cent to €30.32. Its shares have been under pressure recently, traders noted.

Explorer Tullow Oil ended the day 2.41 per cent up at €1.70. Its sector benefitted from news that Saudi Arabia intends cutting crude production this year. The company is also due to report on Wednesday.

Investors found news of slowing growth at Dominos Pizza hard to digest. The stock went down all too well, hitting a one-year low of 255.8p sterling before recovering some ground to close 5.55 per cent down at 263.7p.

The chain reported that first-half sales rose 10.5 per cent but like-for-like growth was only 2.4 per cent, a marked decline on last year’s 13 per cent, as the company flagged poor consumer sentiment and a slowdown in the overall delivery market.

Designer shoe maker Jimmy Choo soared almost 17 per cent to close at 228.25p after news that US fashion brand Michael Kors will pay £896 million for the company.

Shares in Provident Financial tumbled 134p to 2,163p after revealing that pre-tax profits dropped by 22.6 per cent to £115.3 million in the six months to the end of June, after suffering disruption while shifting its home credit business to a new model.

Reuters published an analysis of the airline showing that it is under pressure to to control costs and shore up its balance sheet.

“The company’s ambitious growth plan is putting pressure on costs due to training of personnel and new bases,” said Jomar Kilnes, a portfolio manager at Forte Fondsforvaltning, a Norwegian Air shareholder, told the news agency.

Eastern European bank Raiffeisen was a standout gainer, up 6.8 per cent, after second-quarter profit roughly tripled to €365 million, helped by reductions in bad-debt provisions.

Randstad, the world’s second largest staffing agency, said on Tuesday its core profit rose 9 per cent to €262 million in the second quarter, roughly in line with market forecasts. Sales rose 14.8 per cent to €5.87 billion. It stock rose 4.9 per cent to €51.60 on the news.

The S&P hit a record and the Dow was higher on Tuesday, helped by a string of strong quarterly earnings from companies, including McDonald’s and Caterpillar, while a drop in Alphabet weighed on the Nasdaq.

Shares of McDonald’s rose 3.8 per cent, hitting an all-time high, after the fast-food giant posted the biggest rise in sales at established restaurants globally in five years.

Caterpillar was up 5.1 per cent, touching a more than five-year high, after the company raised its full-year outlook for the second time this year. – Additional reporting: Reuters

1 Donohoe’s new role, House of Ireland shuts, and being indispensable at work
2 ‘Sad day’ for House of Ireland as tourism retailer goes out of business
3 ‘My rent here is so low it’s a joke’
4 Paschal Donohoe’s election as Eurogroup president ‘a great win for Ireland’, says Taoiseach
5 Caveat: The tourism sector deserves to be taken more seriously in this crisis
6 Donohoe’s new role puts State at centre of debate over EU’s future
7 The €1 billion market: retailers who serve tourists face double trouble in a pandemic
8 Remote working: How to get ahead in a changed world
9 Gardaí raid Irish office of failed German payments group Wirecard
10 Ryanair accuses ‘screen scrapers’ of blocking refunds
Real news has value SUBSCRIBE