Dollar near two-year lows against euro after Draghi comments 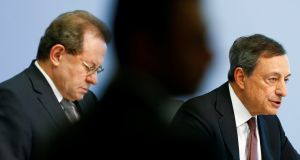 The dollar headed for weekly losses on Friday, wallowing at its lowest levels against the euro in nearly two years after what markets perceived as hawkish talk from European Central Bank chief Mario Draghi.

But the Australian dollar skidded against the greenback after contrastingly dovish comments from a Reserve Bank of Australia official.

The dollar index, which tracks the US currency against a basket of six major rivals, was flat on the day, not far from its overnight low of 94.090, its deepest nadir since August 2016. It was down 0.9 per cent for the week.

Draghi said that no exact date had been set for discussing any changes to the ECB’s ultra-easy monetary programme but did say policymakers would revisit the topic in the autumn.

His comments were perceived as “hawkish, even though the ECB didn’t tip its hand as to when it will begin balance sheet normalisation and in fact left the door open to additional easing if needed,” said Bill Northey, chief investment officer at U.S. Bank Private Client Group in Helena, Montana.

The euro crept 0.1 per cent higher against its Japanese counterpart to 130.32 yen, within sight of last week’s high of 130.76 yen, its highest since February. It was on track to gain 1 per cent for the week.

The dollar’s losses against the yen were mitigated by market expectations that the Bank of Japan will keep its massive stimulus programme in place far longer than other major central banks amid stubbornly weak inflation.

On Thursday, the BOJ kept monetary policy steady as expected and postponed the timeframe to achieve its ambitious inflation target for a sixth time, though it slightly raised its economic growth forecasts.

Concerns over low inflation will likely keep the Federal Reserve from raising US rates at its policy meeting next week, analysts said.

Fed Chair Janet Yellen signalled caution in her congressional testimony last week, with disappointing US inflation and retail sales data a week ago adding to evidence that the central bank has reason to take its time in tightening even as it has vowed to do so.

“When you look at dollar/yen, the Fed has explicitly said they’re on a rate-hiking curve, and the BOJ has said this week that they still have a specific 2 per cent inflation figure in mind, and they’re going to hit it,” said Bart Wakabayashi, branch manager for State Street Bank in Tokyo.

“So I would have expected the dollar to be even higher than where it is against the yen now, and this background is definitely limiting the dollar’s losses,” he said.

US President Donald Trump’s failure to garner enough support for his healthcare bills in the Senate this week also weighed on the dollar, as it raised fears about similar obstacles in passing his stimulus and tax reform agendas.