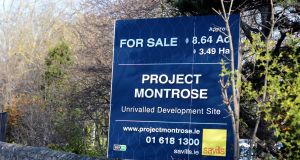 Cairn Homes said on Monday that it had completed the €107.5 million purchase of 8.64 acres of land at the RTÉ’s complex in Donnybrook. Photograph: Cyril Byrne /

Cairn Homes, which floated on the London Stock Exchange two years ago, is poised to join the Dublin bourse in the middle of next week in a move which may serve to lure more domestic investors into the only Irish housebuilder to list on the market in two decades, according to sources.

The company, led by chief executive Michael Stanley, revealed earlier this year that planned to take out a full listing in Dublin, having been prevented from doing so up until now because it didn’t have a sufficiently long financial performance track record.

Its €1.05 billion market value would leave it just outside the 10 largest companies on the Iseq.

The Irish Stock Exchange has waived its normal requirement that a company have at least a three-year financial history before being admitted to the main market. The bourse can do this if it feels that potential investors have sufficient information to make an informed decision. Cairn Homes was set up in November 2014.

“Having a listing in Ireland should open up a new avenue of investors for Cairn,” said Ronan Dunphy, an analyst with Investec in Dublin. “The fact that it has been given a waiver by the Irish Stock Exchange is an endorsement of what the company has done so far.”

Cairn Homes said on Monday that it had completed the €107.5 million purchase of 8.64 acres of land at broadcaster RTÉ’s complex in Donnybrook in Dublin, on which it plans to seek permission to build 500 apartments and nine houses.

The company placed almost €52 million of new shares in May to partly fund the acquisition, which was well above the original €75 million price guided by Savills, the agent that marketed the site.

That brings to about €720.5 million the equity Cairn has raised in a little over two years, including its €440 million initial public offering (IPO).

Next week is shaping up to be a busy one for the Dublin exchange, with wind energy company Greencoat Renewables expected to float on Tuesday as it completes a €250 million IPO, in which the State’s Ireland Strategic Investment Fund (ISIF) is an anchor investor.

ISIF and AIB provided the financing for the company’s initial portfolio, comprising 137 megawatts of wind farm assets in Co Cork and Co Tipperary, which the firm acquired from Canada’s Brookfield Renewable Partners. The assets equated to about a fifth of a 700MW wind portfolio that Brookfield bought in 2014 from Bord Gáis, since renamed Ervia.

Greencoat Renewables, set up by UK renewable energy investment group Greencoat Capital, plans to use the proceeds from the IPO to but further assets, with its current focus on wind in Ireland. It also plans to expand into other euro zone countries and buy solar assets in time.