Dollar catches breath after plunging on collapse of US healthcare bill 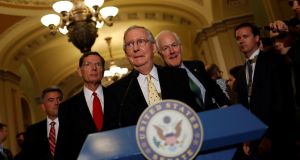 US Senate Majority Leader Mitch McConnell arrives to speak with the media about the recently withdrawn healthcare bill on Capitol Hill in Washington. (Photograph: Reuters)

The dollar nursed losses on Wednesday after skidding to a 10-month low against a currency basket as Republican legislators’ failure to pass a stalled healthcare bill raised fears for the rest of President Donald’s Trump reform agenda.

Republican efforts to overhaul or repeal Obamacare collapsed in the US Senate on Tuesday, rattling financial markets and casting doubt on the chances of getting Trump’s economic plans, such as tax reform and stimulus, through a divided Congress.

The dollar index, which tracks the greenback against a basket of six major rivals, edged up 0.2 per cent to 94.780 after falling as low as 94.476 on Tuesday, its lowest level since September 2016.

The European Central Bank will hold a policy meeting on Thursday, with participants seen likely to adjust their language as they edge the ECB towards normalising policy.

Such adjustments may include dropping a reference to the bank’s readiness to increase the size or duration of its asset-purchase programme before announcing in the autumn how and when it will start winding down its bond-buying.

The ECB, keen to retain flexibility in case the outlook sours, is set to keep its asset purchases open-ended rather than setting a potentially distant date on which bond-buying will stop, three sources familiar with the discussion said.

“For the ECB, the market has shifted its expectations somewhat in recent weeks, especially following Draghi’s comments which were taken to be more hawkish,” said Mitul Kotecha, head of Asia macro strategy for Barclays in Singapore.

“To this extent, there’s a lot already priced in, in terms of both the euro and expectations of ECB policy,” he said. “The attention is on whether that is sustained in terms of what Draghi was saying, or whether we’ll see some reassessment.”

Expectations that the Federal Reserve will be more cautious about raising interest rates also weighed on the greenback.

Economic data on Tuesday showed US import prices falling for a second straight month in June as the cost of petroleum products declined further, suggesting inflation pressures could remain weak for a while.

Fed Chair Janet Yellen signalled caution in congressional testimony last week, with disappointing US inflation and retail sales data on Friday adding to evidence that the central bank has reason to take its time in tightening.

“The failure of the healthcare bill added the newest pressure to the dollar, but it was already under pressure after Yellen’s comments last week,” said Mitsuo Imaizumi, Tokyo-based chief foreign exchange strategist for Daiwa Securities.

The Fed chief referred to “uncertainty,” he said, a word that “makes markets nervous,” and prompted them to pare their expectations of another interest rate hike this year, he said.

The Bank of Japan will also conclude a policy meeting on Thursday. Policymakers are expected to raise their economic growth forecasts but cut their rosy inflation outlook, sources say, reinforcing expectations it will lag well behind major global central banks in dialling back its massive stimulus programme.

A majority of economists polled by Reuters expect the BOJ to delay again its projected timing for achieving the 2 per cent inflation target.

The Australian dollar was up 0.2 per cent to $0.7926 after surging to two-year highs on Tuesday as minutes of the last meeting of the country’s central bank showed policymakers turned more upbeat on the economic outlook.

The dollar edged down 0.2 per cent against the Mexican peso to 17.446 after credit ratings agency Standard & Poor’s on Tuesday revised Mexico’s sovereign credit outlook up to “stable” from “negative,” and commended the government’s efforts to rein in a surge in debt.