Deal will cost GVC up to €4.51bn and would rank company among Britain’s largest 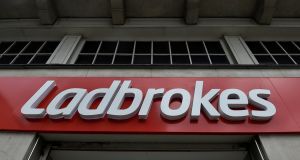 The tie-up comes against a backdrop of tightening regulation in the British gambling industry which has grown to a multi-billion pounds sector over the last decade. Photograph: Toby Melville/Reuters

Online gambling group GVC has agreed to buy bookmaker Ladbrokes Coral for up to £4 billion (€4.51 billion) to create a company that would rank among Britain’s largest businesses.

GVC, the owner of the Sportingbet, Bwin and Foxy Bingo brands said it would pay 32.7 pence in cash and 0.141 new GVC shares for each Ladbrokes share.

The final price will depend on the outcome of a review into fixed-odds betting terminals (FOBTs), which are moneyspinners for companies such as Ladbrokes but have come under fire for leaving gamblers with heavy losses.

The review is expected to conclude in the second half of January to settle the maximum amount that can be wagered at a betting terminal.

Ladbrokes Coral, which dethroned William Hill as the UK’s largest bookmaker after merging with Coral last year, made about £800 million of revenue from gaming machines in 2016.

GVC’s bid marks the biggest wager yet by Kenny Alexander, who would become chief executive of the combined group, which is expected to be large enough to enter Britain’s FTSE 100 index.

“The creation of one of the world’s largest listed sportsbetting companies, combining a portfolio of established brands, proven technology and leading market positions in multiple geographies, is a truly exciting prospect,” Mr Alexander said in a statement.

The tie-up comes against a backdrop of tightening regulation in the British gambling industry which has grown into a multibillion pounds sector over the last decade since the 2005 gambling act liberalised rules and allowed companies to use TV advertisements for promoting sports betting, online casinos and poker.

The industry has also been transformed by the growth of online betting, attracting a new generation of gamblers who use smartphones and tablets to bet on live sports.

Mr Alexander has built GVC through a series of increasingly ambitious deals, including the £1.1 billion reverse takeover of Bwin.Party, growing it from an upstart gambling firm to a FTSE 250 business.

The deal would also bring GVC into British retail gambling through its acquisition of approximately 3,500 betting shops, making it the biggest player on the high street and competing with William Hill and Paddy Power Betfair.

GVC’s offer values Ladbrokes Coral at 164.4 pence per share, equating to a total equity value of about £3.2 billion, plus a contingent fee of up to 42.8 pence a share, meaning the bookmaker could be valued at about £4 billion.

GVC said it believed that the combined group will be able to achieve recurring annual pre-tax cost synergies of not less than £100 million.

GVC had announced this month that it was in talks with betting shop operator Ladbrokes about a possible cash-and-shares takeover.

The deal is expected to close late in the first or early in the second quarter of 2018, GVC said. – (Reuters)