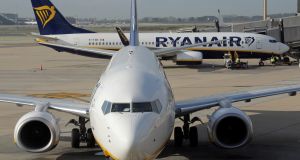 Shares in Ryanair fell 8.5 per cent to trade at €15 in Dublin

Across Europe, Ryanair and H&M were the biggest losers, with the former announcing that it would recognise unions. H&M, meanwhile, issued a disappointing trading update.

In the US indexes rose, driven by gains in shares of banking and healthcare companies.

Perhaps unsurprisingly, Ryanair was the biggest loser on Ireland’s benchmark index on the last day of the trading week. Following an announcement that Europe’s largest airline by passenger numbers would recognise unions, the stock fell 8.51 per cent to trade at €15. One analyst said the news adds complexity and uncertainty to the stock. The company’s market capitalisation was cut to the tune of around €1.7 billion as a result of the sell-off.

On a more positive note, Kingspan traded up by 2.42 per cent after announcing the planned purchase of a Barcelona-based Synthesia group for around €250 million. The insulation group also said it had committed more than €620 million to 10 acquisitions so far this year.

The FTSE 100 edged up 0.6 per cent, closing the week up 1.2 per cent, having hit its highest level in a month on Wednesday.

Oil majors Shell and BP propelled the index higher as crude prices recovered, lifted by the Forties pipeline outage in the North Sea.

Sky rose 2.8 per cent, the biggest FTSE gainer, after striking a deal with BT to carry each other’s channels. BT gained 1.4 per cent.

Small-cap LED lighting maker Luceco sank 45 per cent after the firm said financial controller Ian Pritchard resigned after misvaluing the company’s stock. The error resulted in an unexpected weakening of the gross margin, leading to a £3.5 million reduction in profit after tax.

The pan-European STOXX 600 lost 0.2 per cent at the end of the session and posted a 0.3 per cent fall over the week as resurfacing worries over political risk spurred profit-taking and offset continued optimism in the region’s economic recovery.

H&M plunged 13 per cent, leading losers on the STOXX, after the world’s second largest fashion retailer reported an unexpected drop in quarterly sales as fewer shoppers visited its stores.

Another outstanding faller was Dealz-owner Steinhoff, down 6.4 per cent. More than $10 billion has been wiped off Steinhoff’s market value in the last two weeks following its disclosure of accounting irregularities and its chief executive’s exit.

On the winning side, shares of Belgian biotech Galapagos topped the STOXX, rising 8.9 per cent after announcing its partnership with pharmaceutical group Gilead.

Costco rose after the retailer reported upbeat results and pushed up the S&P Consumer Staples index by 1.15 per cent.

The S&P 500 and the Dow were on track to record four weeks of gains in a row, while the Nasdaq was set to post its first rise in three weeks.

1 Dublin Airport says pre-flight Covid tests possible ‘within days’
2 How long can Government afford to keep State pension age at 66?
3 US economic activity rebounds at a record pace
4 Apple iPhone 12 Pro: Well worth the wait
5 Singer Niall Horan shares in €1.7m payday from Irish business
6 Sanofi, GSK to supply vaccine doses to WHO-backed alliance
7 Media critical to Ireland’s democracy, says Taoiseach
8 Ten of the most mysterious aircraft disappearances
9 Ethical investors: Do they want to do good or just feel good?
10 Over 60% of mortgage holders miss chance to save €10,000
Real news has value SUBSCRIBE