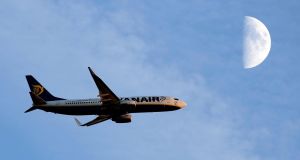 Shares in Ryanair rallied by 2.3 per cent to €14.95, recovering some of the ground lost over the previous two sessions. Photograph: Chris Radburn/PA Wire

Irish stock market heavyweights CRH and a rebounding Ryanair lifted the Iseq index higher on Tuesday as the wider European and US markets succumbed to selling pressure.

Ryanair rallied by 2.3 per cent to €14.95, recovering some of the ground lost over the previous two sessions as investors fretted about the cost of the low-cost airline’s move to recognise unions.

C&C edged 1.5 per cent higher to €2.90 after Admiral Taverns, the UK pubs group in which the Irish cider and beer maker recently acquired a 47 per cent stake, issued a positive update as it unveiled results for the year to the end of June. Goodbody Stockbrokers estimates that Admiral will boost C&C’s earnings per share by 5 per cent next year.

Dalata – which has gained almost 40 per cent so far in 2017 – dipped 1.1 per cent as investors gleaned little inspiration from the group’s latest trading update, which said its performance in the final four months of the year had been “as expected” and in line with analysts’ estimates.

Kenmare added 1.3 per cent to €3.13, after Australian peer Base Resources unveiled a deal to acquire a mineral sands project in Madagascar. Davy analyst Job Langbroek said the deal was as much a comment on the market for the raw materials for titanium as it was about Base Resources’ ambitions.

The healthcare sector contributed the most to gains of the FTSE. Shares in Dublin-headquartered Shire suddenly spiked to end up 3.8 per cent, reversing earlier weakness that followed a disappointing trial update for one of its drugs.

Spreadbetters IG Group and CMC Market, which plunged during the previous session after regulatory threats to parts of their business, ended up 1.7 per cent and 0.2 per cent respectively.

However, Associated British Foods lost 1.7 per cent after analysts at Royal Bank of Canada downgraded their view on the stock to the equivalent of “hold” amid concerns over the near-term sales growth prospects for its Primark division.

The Stoxx Europe 600 declined as gains for airline shares and property companies failed to offset a drop in resource stocks.

The region’s core bonds declined, with German yields seeing their biggest gains in more than five months after a European Central Bank governing council member said discussions were moving to the future use of interest rates rather than asset purchases to regulate the economy.

Steinhoff International, the South African parent of Dealz/Poundland which has a dual listing in Germany, slid 20 per cent as the company dealt with an ongoing scandal over financial irregularities.

US stocks fell as investors locked in profits after recent highs in the tech sector, and before US Republican legislators achieve their goal of passing tax-reform legislation.

The plan would lower the corporate income tax rate to 21 per cent from 35 per cent, which analysts say would likely increase profits, buybacks and dividend payouts.

The Dow Jones Industrial Average and S&P 500 indices each lost about 0.2 per cent, while the Nasdaq Composite dropped 0.4 per cent.

Apple shares fell 1.23 per cent after broker Instinet downgraded the stock to “neutral” from “buy” on doubts about iPhone X sales.

Wal-Mart rose 0.8 per cent after Citigroup upgraded the stock to “buy”, on expectations that the retailer’s shares will rise further in 2018. – Additional reporting: Reuters, Bloomberg