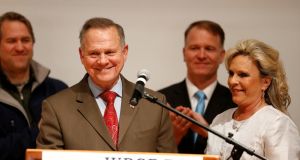 The dollar slipped from a four-week high against a basket of currencies on Wednesday after a Democrat won a bitter fight for a US Senate seat in deeply conservative Alabama, reducing Republicans’ already narrow Senate majority further.

The reduced Senate majority could make it harder for President Donald Trump to push through tax cut plans and other economic agenda.

Earlier the dollar was lifted by stronger-than-expected US producer price data published on Tuesday and ahead of almost unanimously expected to rate hike by the Federal Reserve at the end of its two-day policy setting meeting on Wednesday.

Investors are focusing more on the Fed’s projection on the pace of its rate hikes next year and policymakers’ view on the outlook for inflation.

The Fed will announce its decision on rates on Wednesday followed by a statement.

While Fed policy makers’ projection in September suggested they expected three rate hikes in 2018, markets are pricing in only two, with many investors expecting tame inflation will lead to a slower tightening path.

“Although the price trend seems to be picking up, it is unclear whether that is enough to convince dovish members of the Fed on the need to be concerned about inflation,” said Shinichiro Kadota, senior strategist at Barclays.

US producer price data for November showed 0.4 per cent increase in wholesale inflation from the previous month.

From a year ago, the producer price index shot up 3.1 per cent, the biggest gain since January 2012 and followed a 2.8 per cent rise in October.

If US consumer price data due on Wednesday also shows a similar uptick, that could fuel expectation of faster Fed rate hikes, analysts said.

Elsewhere, the British pound hovered at $1.3315, near two-week lows of $1.3303 touched on Tuesday, although the currency was briefly propped up by data showing British inflation unexpectedly hit a near six-year high in November.

Consumer price inflation rose to an annual rate of 3.1 per cent in November, above economists’ average expectations of 3.0 per cent rise.

As that is more than a percentage point above the Bank of England’s 2 per cent target, governor Mark Carney will have to explain to finance minister Philip Hammond what the BoE is doing in response.

There was no notable change in market expectations on the BoE’s policy outlook, with sterling overnight indexed swaps pricing in a very small chance of a rate hike within the next six months.