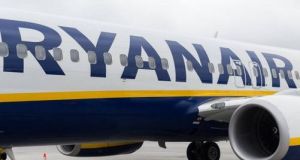 Ryanair rose 1.3% to €15.15 on a day when it continued to deal with industrial relations tensions

Major global stock markets were little changed on Wednesday, hovering near recent record highs, while US treasury yields held close to multi-month peaks as a $1.5 trillion US tax reform bill approached the finish line in Washington.

The Republican-led US House of Representatives gave final approval to the legislation later on Wednesday, which would enact the nation’s biggest tax code overhaul in more than three decades. The house had initially passed the plan but was forced to revote due to procedural problems.

The Iseq slipped 0.3 per cent in line with sluggishness across Europe. Ryanair rose 1.3 per cent to €15.15 on a day when the airline continued to deal with industrial relations tensions. Food group Glanbia was notably weak in late trading after a good run, falling 4.5 per cent to €14.46.

Real estate investment trust stocks Green Reit and Hibernia Reit were among the fallers, as was drinks company C&C and insulation maker Kingspan. Paddy Power Betfair added 0.6 per cent to €99.24.

British shares dipped, with the FTSE 100 of blue-chip companies shedding 0.3 per cent.

NMC Health was the biggest faller, losing 4 per cent after it reiterated its guidance for 2018 and gave an update on its strategy.

British American Tobacco was the biggest weight, down 1.5 per cent following gains in the previous session. Some analysts have said BAT should benefit from the US tax reform as the UK-listed tobacco company makes more than 40 per cent of its profits in the United States.

Drugmaker Shire fell back 1.4 per cent following a 3.8 per cent surge in the previous session that traders attributed to vague takeover rumours.

Irish oil and gas exploration company Tullow Oil, which has its main listing on the London market, led the risers, advancing 5.7 per cent to 192.9 pence amid firming crude oil prices and following an upgrade from “underperform” to “hold” by analysts at investment firm Jefferies.

The upgrade for the FTSE 250 stock was motivated by Tullow’s recent successful refinancing, which Jefferies said removed a risk for the company.

The Cac 40 in France and Germany’s Dax were down 1.1 per cent and 0.6 per cent respectively as European shares fell. The Stoxx Europe 600 index fell 0.7 per cent, its biggest drop in almost three weeks.

The euro climbed against the dollar, as did the British pound.

After mixed early trading, US stocks rallied ahead of the tax legislation. AT&T gained 1.9 per cent and Verizon 0.5 per cent. Energy stocks also rose 0.8 per cent as oil prices rose half a per cent, supported by a larger-than-expected drop in US inventories.

FedEx jumped nearly 4 per cent to a record after its strong results and forecast, saying the tax overhaul would benefit earnings further. Technology stocks, expected to benefit the least from lower taxes, were down 0.17 per cent on the S&P 500.

Chipmaker Micron was up 4.5 per cent after its strong results and forecast. Consumer staples index fell 0.64 per cent, weighed down by a 2.1 per cent slide in Philip Morris. Reuters reported former Philip Morris employees detailed irregularities in the clinical trials for the company’s e-cigarette, due to be voted on by the US FDA next year. – Additional reporting: Bloomberg / Reuters / PA