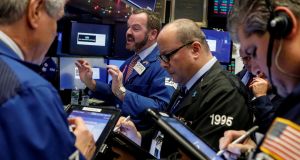 European shares lagged their US peers and closed in negative territory on Thursday, as a busy day of central bank meetings failed to provide momentum even though the European Central Bank raised its growth and inflation forecasts.

Europe’s STOXX 600 ended the day down 0.46 per cent, while US stocks climbed higher in morning trading, boosted by news that a long-awaited tax cutting bill should face final votes in Congress before the year-end. “The only reason for US stocks to overperform today is the hope of a tax reform,” said Nicolas Cheron, head of research at Binck, adding that investors were typically cautious at this time of the year before often heading into a “Christmas rally”.

Dublin’s Iseq fell 45 points to 6,968, tracking movements elsewhere in Europe. Bank of Ireland ended the day up 0.2 per cent at €6.96 consolidating recent gains on strong trading volumes, while rival AIB tracked up by a similar amount to close at €5.51.

Ryanair underperformed the sector, trading down 2 per cent at €16.40, as impending strike action at the airline moved a step closer .

PaddyPower Betfair fell 0.4 per cent to €96.62 as talks between rival GVC and Ladbrokes Coral on a possible takeover intensified.

Property company Hibernia Reit, meanwhile, fell 3 per cent to €1.46 despite the ongoing strength of property values.

News that Disney will snap up a raft of 21st Century Fox’s entertainment assets including Sky sent the broadcaster’s shares to the bottom of the FTSE 100 and dragged the blue chip index into the red.

The FTSE 100 ended the day down 0.65 per cent or 48.39 points at 7448.12, with Sky among its biggest fallers down 1.8 per cent or 19p at 990p. The $52.4 billion deal sparked investor jitters over Sky’s future under Disney, which will take on a 39 per cent stake in the business. That is despite reassurances from Disney chairman and chief executive Bob Iger, who told Bloomberg TV: “Absolutely. All of Sky has a future.”

Sports Direct shares dropped 8.5p to 374.9p after statutory pre-tax profits plunged 67.3 per cent for the half year to October 29th, which the company put down to “fair value adjustments and transitional factors such as the disposal of assets”. The retailer also reported falling UK retail sales amid store closures, reduced online promotions and higher costs liked to the weaker pound.

Lonmin surged 12.75p to 76.5p after the platinum miner agreed to a takeover by South African rival Sibanye-Stillwater in a £285 million deal. Shares in Ocado edged higher by 2p to 343.6p despite revealing slowing sales growth in the fourth quarter, having suffered from a shortage of delivery drivers in London and the southeast.

France’s BNP Paribas and Italy’s Intesa were the biggest drags to the Europe’s STOXX 600. Heavily weighted towards financial stocks, Italy’s FTSE MIB was among the worst-performing European bourses, down 0.9 per cent, failing to bounce back after heavy losses in the previous session as political worries resurfaced.

Most sectors were negative, particularly consumer staples, with Unilever losing 1.2 per cent, and healthcare stocks where Glaxosmithkline fell 1.8 per cent. French technology consultancy Atos fell 2.8 per cent after its offer for chipmaker Gemalto was rebuffed.

Gemalto fell only 0.21 per cent to €46.90, above the €46 per share bid, showing a number of investors were betting on an improved offer. The latest twist in South African retailer Steinhoff’s accounting woes sent its German-listed shares down 13.3 per cent as it said it would have to restate 2016 financial results. Among gainers, wind turbine maker Vestas Wind jumped 7 per cent, with its Spanish peer Siemens Gamesa up 3.5 per cent, with a change to the US tax reform package giving the sector a boost.

The S&P 500 and the Dow were trading flat in early afternoon trading on Thursday as losses in healthcare stocks such as Johnson & Johnson were offset by gains in shares of technology and consumer discretionary companies. Walt Disney struck a deal to buy Twenty-First Century Fox’s assets for $52.4 billion in stock. Fox rose 4.12 per cent and Disney 2.2 per cent, boosting the consumer discretionary sector by 0.5 per cent. Other media stocks Netflix and Comcast were also higher.

1 Revenue publishes list of companies tapping State for wage support
2 Trump vs Biden: Stakes are high for the Irish economy
3 How long can Government afford to keep State pension age at 66?
4 Bake-off soy sauce tweet backfires for UK trade ministry
5 ‘Going abroad forced me to challenge assumptions that I had’
6 107 jobs at risk as Broderick’s shareholder considers examinership
7 Corporate America is breaking with Donald Trump
8 PTSB’s €1.4bn sale is a sign it is preparing for a fresh loans crisis
9 Will remote working become the norm?
10 Cost of building homes can be ‘much cheaper’
Real news has value SUBSCRIBE