If you were a market bear in 2017 you got burnt 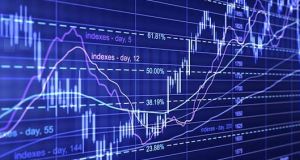 The world’s five most valuable companies - Apple, Google’s parent Alphabet, Microsoft, Amazon and Facebook – each gaining between 37% and 56% in 2017 to leave them with a combined market capitalisation of €2.8 trillion. Photograph: Getty Images 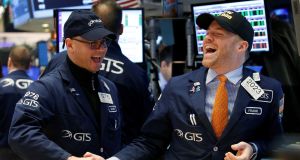 Allegations of Russian interference in US elections. A rocky first year for the new incumbent in the White House. A rogue nation testing weapons of mass destruction. And the risk of a disorderly exit of Europe’s second largest economy from the EU.

Any of these would ordinarily be enough to send global stock market investors diving for cover. But not in 2017 – not when central bankers largely maintained extraordinary post-crisis stimulus policies and the global economy continued to expand. China continued to defy doomsayers, and Europe, finally, crawled out of the doghouse.

“The main themes for investors during 2017 were record low volatility across equity markets, significant and relentless gains for the largest market value technology companies and an ongoing race for yield [income] among bond investors, which pushed both investment grade and junk bond yields lower as the year progressed.”

US equity markets reached new highs seemingly on a daily basis for much of the year, with the Dow Jones Industrial Average rising by about 25 per cent in 2017, while the wider S&P 500 index gained 20 per cent.

Meanwhile, the MSCI All-Country World Index, the widest gauge of global markets, also advanced 21 per cent to new heights as it hurtled towards a nine-year bull run.

The world’s five most valuable companies - Apple, Google’s parent Alphabet, Microsoft, Amazon and Facebook – led the way, with each gaining between 33 per cent and 58 per cent to leave them with a combined market capitalisation of $3.3 trillion (€2.8 trillion)

In a “Goldilocks” backdrop of decent economic growth and low inflation, earnings estimates for stocks across developed and emerging markets globally have risen to the highest on record, according to Bloomberg data, surpassing the previous peak just before the global financial meltdown in 2008.

“Equities turned out far stronger than we anticipated [in 2017] – and we were optimistic,” said Bernard Swords, chief investment officer at Goodbody Stockbrokers.

“The unusual strength in earnings growth has driven the surprising result in equity markets. Much of it has been due to stronger economic growth across all major regions of the world – a synchronised expansion that we have not seen since 2010.”

The year didn’t look so rosy at the outset, as analysts surveyed the political landscape and feared that 2016 anti-elite outcomes of the Brexit referendum and US presidential vote would spill over into a number of European elections.

“Politics remained a constant influence on markets throughout the year. First off we had the French presidential election and, as it happened, notwithstanding some early poll worries, centrist candidate Emmanuel Macron topped the first round of voting and ultimately went on to be victorious in the head-to-head second round with [far-right politician] Marine Le Pen, ” said Aidan Donnelly, head of equities at Davy’s private clients division. “The result gave a nice fillip to equity markets.”

Similarly, markets took comfort when Dutch prime minister Mark Rutte saw off populist upstart Geert Wilders in national elections in March, and as German chancellor Angela Merkel’s party topped the polls in September – though she has struggled to form a coalition since then.

“Under the category of ‘snatching defeat from the jaws of victory’ few can argue that the Conservative Party’s performance in a [snap UK June] election doesn’t rank near the top of the list,” according to Donnelly.

British prime minister Theresa May’s bid to strengthen her hand in Brexit talks with a greater parliamentary majority backfired, and the Tories ended up relying on the Democratic Unionist Party in the North to cling on to power.

The strength of the euro in 2017 against sterling – spilling over from the aftermath of the Brexit referendum – and the dollar saw Dublin and European markets underperform US and global benchmarks. The Iseq edged just 7.8 per cent higher, while the pan-European Stoxx 600 advanced 8 per cent.

“Even though many of the leading companies reported good results in the period, many of the shares succumbed to profit-taking after a strong start to the year,” said Donnelly.

Still, the Irish Stock Exchange attracted three successful initial public offerings (IPO), led by the State’s sale of a 28.8 per cent stake in AIB for €3.4 billion, the largest such deal in Europe in 2017.

Meanwhile, the world’s most talked-about “new asset class” bitcoin soared as much as 17-fold to stun critics and devotees of the digital currency alike, prompting bourses such as the Chicago Board of Options Exchange to launch contracts allowing investors to bet on its future value.

Market grandees from JP Morgan chief executive Jamie Damon to billionaire investor Warren Buffett have described the cryptocurrency as a dangerous bubble. And as 2017 draws to a close, the bears are tussling with the bitcoin bulls, with the crypto-currency’s value having fallen by 25 per cent in less than two weeks.