Ryanair shares down 2% after decision to recognise pilots’ unions 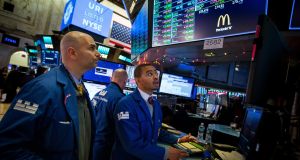 Traders on the floor of the New York Stock Exchange on Monday. The Nasdaq surpassed the 7,000-point mark for the first time in the early afternoon. Photograph: Michael Nagle/Bloomberg

Markets kicked off the build-up to Christmas on a positive note after US lawmakers agreed on tax cuts in the world’s biggest economy.

Ryanair remained the big focus on the Irish market following its pledge at the weekend to recognise pilots’ unions. Its stock hit a low of €14.20 before paring back some of those losses and closing 2.1 per cent off at €14.61.

Its shares have lost more than 10 per cent of their value since the close of business on Thursday, the day before it announced its change of policy on trade unions. However, traders suggested the fact that it regained ground after hitting a low on Monday could indicate that it has found its new level.

House builder Cairn Homes was one of the better performers, climbing 2.1 per cent to €1.94. There was no news driving the advance, but traders said the stock was edging closer to the “significant” €2 mark.

Index heavyweight building materials group CRH gained close to 1 per cent to to €28.82. Other European stocks in this industry enjoyed a good day as most have US operations thought likely to benefit as the tax changes there have an impact.

AIB rose by just under 2.5 per cent to close at €5.728. Traders said there was a “lot of strong buy interest” in the bank throughout the day.

Budget airline EasyJet tumbled 2.8 per cent to 1377p after announcing that it had agreed to buy Air Berlin’s operations at Tegel Airport in the German capital for €40 million, including leasing 25 of its aircraft.

Chief executive Johan Lundgren said it was consistent with EasyJet’s policy of investing in Europe’s leading airports. Its fall was one of the sharpest on London’s blue chip FTSE 100.

In the same sector, International Airlines Group, owner of Aer Lingus, closed up 0.5 per cent at 636p.

Irish-based DIY specialist and builders’ merchant Grafton gained 1.4 per cent to close at 778.50. Traders said the Woodies owner was trading in line with UK rivals.

Engineering group Babcock International added 3.2 per cent to end the day at 706.5p after securing a 10-year contract, worth up to £95 million over the first three years, to provide containment and handling services at the Sellafield nuclear site in northwest England. The increase made it one of the best FTSE performers on the day.

European indices climbed as investors bet on the US legislature introducing its business-friendly tax policies before Christmas. The Stoxx Europe 600 index climbed the most in about five months as real estate, automakers and technology stocks led gains.

Danish wind turbine maker Vestas rose 4.2 per cent on the grounds that it would benefit from tax credits included in the package.

Italian cement-maker Buzzi Unicem advanced 2.73 per cent to close at €22.60. Its sector is one of those poised to gain from the US reforms.

German airline Lufthansa gained almost 2 per cent to close at €30.38 on a mixed day for aviation.

The Nasdaq surpassed the 7,000-point mark for the first time in early afternoon on Monday, while the S&P and the Dow were at record levels on rising optimism among traders that Republican promise of lower corporate tax rates would soon be a reality.

Shares of Amplify Snack soared above 70 per cent to $11.99 after Hershey said it would buy the SkinnyPop popcorn maker in a $1.6 billion deal.Hershey rose 0.6 per cent.

Synder’s-Lance was up about 7 per cent after Campbell Soup said it would buy the Pretzels and Cape Cod chips maker for $4.87 billion.

Casino operator Penn National Gaming said it would buy Pinnacle Entertainment in a $2.8 billion deal. Penn National dipped about 5 per cent, while Pinnacle’s shares were flat.