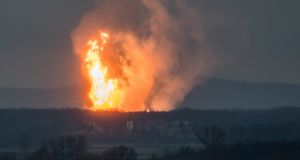 A column of fire is seen after an explosion ripped through Austria’s main gas pipeline hub in Baumgarten. Photograph: Tomas Hulik/Reuters

An explosion and fire that ripped through Austria’s main gas pipeline hub on Tuesday killed one person and injured 21 others, prompting Italy to declare a state of emergency as flows from the strategic site were cut off for most of the day.

The Baumgarten site in eastern Austria, near Slovakia, is a major regional transfer node, taking natural gas from as far away as Russia and pumping it towards neighbours including Germany and Italy, Baumgarten’s biggest recipient.

News of the blast sent gas prices in Europe soaring on fears it would restrict supply as winter sets in. But by Tuesday evening the site’s operator, Gas Connect Austria, said it would be brought back online before midnight, confirming a statement by Italian grid operator Snam.

The news came after Britain’s biggest pipeline from its North Sea oil and gas fields is likely to be shut for several weeks for repairs, its operator said on Tuesday, disrupting gas flows and sending international crude prices to their highest since mid-2015.

The closure has struck during a winter freeze in Britain, where snow and ice have driven up demand for heating fuel just as gas flows through the network,

The pipeline, which carries about 450,000 barrels per day (bpd) of Forties crude, was shut after cracks were found. It has particular significance to global markets because Forties is the largest out of the five crude oil streams that underpin the dated Brent benchmark.

The Paris-based International Energy Agency, which advises Western governments and coordinates the release of oil from strategic stocks in the case of supply disruptions, said it stood ready to take action but it did not believe this was necessary for the time being. “The market is amply supplied from other sources and stocks are well above the five-year average,” the IEA said.