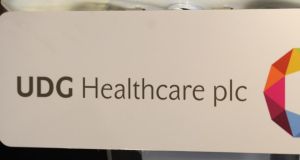 Healthcare services provider UDG has said it has “a strong pipeline” of potential acquisitions lined up as it reported a sharp rise in revenue and profits in the six months to the end of March.

The company said recent deals helped it deliver a strong performance during the first half.

Adjusted diluted earnings per share rose 21 per cent on a constant currency basis. The company increased the dividend to 4.25 cent per share, a 19 per cent rise on the prior period.

Listed on the London Stock Exchange, the Dublin-based provider of services to healthcare manufacturers and pharmacies employs more than 9,000 people worldwide and has operations in 24 countries.

The company operates across three divisions: Ashfield, Sharp and Aquilant.

Operating profit at Ashfield rose 18 per cent on a constant currency basis on the benefits of acquisitions in the previous year. Excluding the impact of Future Fit, growth in operating profit dropped to 6 per cent.

A good second quarter for Sharp was not enough to offset weakness in the first three months of the fiscal year, leading to operating profit falling 2 per cent behind the prior period. But analysts at Davy noted evidence of “improving momentum” at Sharp through the second half of the year and into 2019.

Looking ahead, UDG reiterated its guidance for the year, with earnings per share growth of between 18 and 21 per cent expected.

The company last year acquired three companies. These included MicroMass Communications, which was bought for up to $75.8 million. It also acquired Cambridge BioMarketing and Vynamic, which were acquired for $35 million and $32 million respectively.

“Integration of the companies we bought last year is going well and there is also a big focus on M&A in the near future. We have a lot of firepower on the balance sheet and conservatively we have about €400 million to €500 million to spend,” said outgoing chief finance officer Alan Ralph.

“It is a really matter of spending that money wisely on the right acquisitions so we’ve got a good pipeline and are hopeful of converting some of those by the end of the year,” he added.