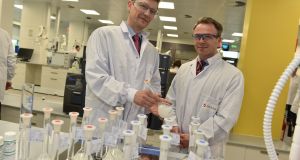 David Cadogan and Killian MacDonald of Gilead Sciences: firm has invested more than €190 million in its Irish business since first opening here in 1999.

Gilead Sciences has opened a new €9.5 million facility at its Cork plant.

The biopharma giant says the new quality control lab at the Carrigtwohill site will boost its production levels for markets in Europe, the Middle East and Asia.

The Cork plant manufactures drugs for the treatment of HIV and hepatitis. It is responsible for a quarter of Gilead’s total production of drugs in tablet form.

“We are delighted to launch this significant expansion, which will have a positive impact on the production of vital medicines for hundreds of thousands of patients around the world,” said David Cadogan, vice-president of manufacturing operations at Gilead. “During the last five years, manufacturing of 11 Gilead products has been transferred to the Carrigtwohill plant, resulting in a significant increase in quality control testing requirements,” Mr Cadogan said.

Gilead has increased staffing significantly in recent years at the Cork facility. The unit employed just 60 people when it was acquired from Nycomed in 2007 just a couple of years after it was first built. The plant now employs 390 people, the bulk of Gilead’s Irish workforce of more than 500.

Gilead says it has invested more than €190 million to date in its Irish business since first opening an operation here in 1999. The latest expansion of its quality control operations follows capital expenditure of €20 million in its Irish operations last year.

The Californian group, which is currently investing heavily in diversification into new generation cancer therapies, exports drugs to more than 100 countries from Ireland.

The new lab was named best commercial/industrial project under €10 million at the 2018 Irish Construction Excellence Awards.