Drugs lobby ‘making absolute fortune’ at the expense of US taxpayers, says Trump 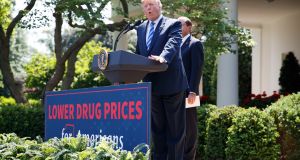 US President Donald Trump on Friday blasted drugmakers and healthcare “middlemen” for making prescription drugs unaffordable for Americans, but healthcare stocks rose as it became clear the administration had avoided taking aggressive and direct measures to cut drug prices.

Trump said his administration would take aim at the “middlemen” in the drug industry who became “very very rich,” an apparent reference to health insurers and pharmacy benefit managers. He also said the pharmaceutical industry is making an “absolute fortune” at the expense of US taxpayers.

Foreign governments “extort” unreasonably low prices from US drugmakers, Trump also said in a speech delivered as his health deputies released a series of proposals to address high drug costs.

But Zeke Emanuel, an expert on drug pricing and fellow at the Center for American Progress, said on CNN that to bring drug prices down, Trump would need to address drugmakers more directly.