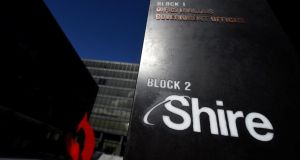 Shire investors will receive $30.33 in cash and either 0.839 new Takeda shares or 1.678 Takeda ADSs for each share. Photograph: Clodagh Kilcoyne/Reuters

Takeda Pharma agreed to buy Ireland-headquartered Shire for £45.3 billion (€51.6 billion) on Tuesday after the Japanese company raised the amount of cash in its offer to $30.33 to secure a recommendation.

Shire investors will receive $30.33 in cash and either 0.839 new Takeda shares or 1.678 Takeda ADSs for each share, the companies said, valuing the offer at £48.17 a share based on the latest price and exchange rate.

The deal - assuming it wins backing of shareholders - will be the largest overseas acquisition by a Japanese company and propel Takeda, led by Frenchman Christophe Weber, into the top ranks of global drugmakers.

“Together, we will be a leader in providing targeted treatments in gastroenterology, neuroscience, oncology, rare diseases and plasma-derived therapies,” he said.

The tie-up is also one of the largest ever in the pharmaceuticals sector, crowning a hectic few months of deal-making as large players look to improve their pipelines.

Shire said last month it would be willing to recommend an offer from Takeda after it rejected four previous approaches.

Shire shareholders will own about half of the combined group after the deal. – Reuters