Company’s products will be distributed to more than 2,800 pharmacies 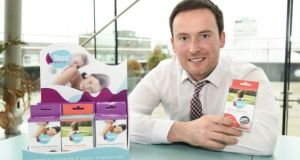 Nasal Medical co-founder Martin O’Connell: “The partnership with Mylan is a significant step forward for us.”

Irish start-up Nasal Medical has signed a deal with Mylan that will see the Dublin-headquartered pharma giant distributing its products across more than 2,800 pharmacies in Ireland and Britain.

The deal marks a significant expansion for the company, which was established in 2015. The company was founded by Martin O’Connell, an electrical engineer from Co Kerry, and Keith Yeager, a mechanical engineer from New York with experience in designing medical devices.

The company, which won the AIB Start-up Academy in 2015, has been selling its Discreet Snoring Aid in up to 400 pharmacies in the Republic. It also recently launched a new product, Allergy Nasal Filter, which is designed to prevent dust, pollen, dander and mould from entering the nasal cavity.

“The partnership with Mylan is a significant step forward for us. We anticipate this to be the first step in our plan to expand into a worldwide medical device company,” said Mr O’Connell.