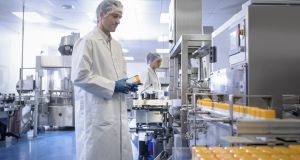 Up to 25,000 new pharma jobs could be created in Ireland if the EU changes the rules on manufacturing of medicines for markets outside the member states

Ryanair said this morning that its profits rose 10 per cent to € 1.45 billion in the 12 months ended March 31st 2018. However, the airline warned that profits for the current financial year could fall to between € 1.25 billion and € 1.35 billion as lower fares and higher fuel costs eat into margins.

Up to 25,000 new pharma jobs could be created in Ireland if the EU changes the rules on manufacturing of medicines for markets outside the member states. According to the European boss of generic drugmaker Mylan, the additional jobs will only come about if a manufacturing waiver on supplementary protection certificates (SPCs) is introduced across Europe. An SPC is an EU-wide intellectual property right that extends the protection of a patented medicine by up to five years. Under the current regulation, firms here are prevented from producing medicines for regions outside the EU during the period of an SPC even if such protection doesn’t exist in those markets.

The hope for new jobs in the sector comes as the biopharma giant Gilead Sciences opens a new € 9.5 million facility at its Cork plant. The plant manufactures drugs for the treatment of HIV and hepatitis and is responsible for a quarter of Gilead’s total production of drugs in tablet form.

Well-heeled Titanic enthusiasts will get the chance to explore the wreck of the “unsinkable” ship thanks to US deep sea exploration firm. For €90,000, a select group of tourists can join one of the firm’s six-day expeditions to the famous ship. However, plans to operate trips this summer have had t to be cancelled: the submarine was struck by lightning, causing damage to 70 per cent of its electronics and delaying its testing schedule.

Japanese group Sumitomo has sold its 30 per cent stake in property company Balmoral International Land Holdings, an investment it inherited last year as part of its takeover of Fyffes. It means that members of the McCann family, which founded Fyffes in 1902, either directly own shares or are linked to companies that have a combined holding of more than 55 per cent of Balmoral’s shares.

The threat of a US-China trade war has eased after a deal was brokered to cut the deficit with the US. Under the terms of the deal, China will import more energy and agricultural commodities from the US to narrow the $335 billion (€284 billion) annual US goods and services trade deficit with China.

Bosses at Moy Park have agreed a four per cent pay deal with trade unions to avoid an all-out strike at one of the North’s biggest employers, sources have confirmed. It is understood the deal came after hundreds of workers took unofficial strike action, not endorsed by any union, and walked out of the plants which supply a large percentage of chickens for some of the UK’s largest supermarket groups including Marks & Spencer, Waitrose, Tesco, Sainsburys and Lidl.

The uncertainty surrounding Brexit is putting “jobs, economic growth and prosperity” at risk, the new president of Chartered Accountants of Ireland has warned. Feargal McCormack says businesses across the island are “hedging” when it comes to investment decisions because of the lack of clarity surrounding the Brexit negotiations.

In his column this week, Chris Johns warns that the UK’s half-baked Brexit ideas for the Border are eroding trust in its negotiating position.

And for those sceptical about the Brexit talks, Pilita Clark may offer some succour. She writes that pessimism and chronic unease help us avoid mistakes and can make good business sense.