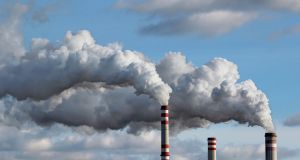 The ESRI says carbon emissions could be at least 20 per cent lower by 2030 if the Government withdrew a range of fossil fuel subsidies. Photograph: iStock

Carbon emissions could be at least 20 per cent lower by 2030 if the Government withdrew a range of fossil fuel subsidies, according to research from the Economic and Social Research Institute (ESRI). Peter Hamilton reports that the subsidies involved include those in the transport and peat productions sectors, with their removal likely to lead to a modest reduction in economic growth and household income.

An Bord Pleanála has given Johnny Ronan’s Ronan Group Real Estate permission to develop 464 build-to-rent apartments and 200 co-living “bed spaces” in the Dublin docklands. Ronald Quinlan has more on the plan, which significantly expands on previous permission for the site. The apartments will include an electric car share club and a multimedia room.

Ryanair switched an incentive scheme for senior managers this year because it “would not” hit profit targets set in 2018, departing chief operations officer, Peter Bellew, told the High Court on Thursday. Barry O’Halloran reports on the ongoing case involving Mr Bellew and his former employer, which has also heard of meetings to tackle pilot absenteeism at Ryanair which had “bad outcomes” in some cases.

John FitzGerald has fiscal stimulus on his mind this week, arguing that “German folk memories of hyperinflation” should not stand in the way of revitalising the euro zone economy.

Still in economics, Eoin Burke-Kennedy looks closer to home in this week’s Business Agenda, asking where the Irish economy might go next after five years of turbo-charged growth.

In his Caveat column, Mark Paul considers the Irish love of conspicuous consumerism, which he says is definitely back in time for Christmas, as well as being much better than recession.

This week’s Wild Goose is Tuam-born Martin Kearns, who began his career in 1987 with an ESB apprenticeship and today finds himself heading an international advisory business in South Africa. He tells Barbara McCarthy there are no restraints on where in the world his work takes him.

And finally, are you considering changing jobs in 2020? Olive Keogh has some advice on what, beyond salary, you should take into account, with trust and respect top of the list.