Ryanair altered incentive scheme as it ‘would not’ hit targets, court told 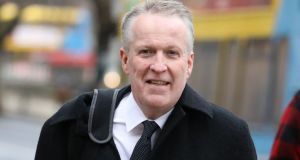 Ryanair switched incentive schemes for senior managers this year because it “would not” hit profit targets set in 2018, departing chief operations officer Peter Bellew told the High Court on Thursday.

In 2018 the airline set a profit-after-tax target of €1.75 billion for its current financial year, which ends on March 31st, as a condition of senior managers cashing in share options in the company.

Mr Bellew argued in court that those share options were “completely obsolete” as Ryanair would not hit the profit target.

He said that by June last year he was certain that the share scheme’s profit targets were unrealistic. “They were unlikely to be reached,” he said.

Mr Bellew claimed that the options could never vest – allowing beneficiaries to cash them in – which was was why Ryanair offered new options in 2019 to replace them.

Ryanair group chief executive Michael O’Leary did not confirm the €1.75 billion target when it was put to him in court, saying this would breach stock exchange rules.

The company said last month that profits for the 12 months ended March 31st would be between €800 million and €900 million.

The carrier is suing Mr Bellew to prevent him joining British airline Easyjet as chief operations officer next month. It says he agreed not to join any competitor for a year after leaving Ryanair when he accepted the 2018 share options.

Mr Bellew says the agreement is null and void, denies breach of contract and pledges not to divulge any confidential information on Ryanair to anyone.

When Ryanair’s shares fell to €11.12 on February 7th this year, the board’s remuneration committee agreed to issue new options at that price. Managers had to surrender 2018 options to benefit from this.

While the remuneration committee approved Mr Bellew for 2019 share options, Mr O’Leary told the chief operations officer in March that they were being withheld unless he improved his performance over the coming six months.

The chief executive told the court last week that he had the power to do this when he had concerns about an individual’s performance.

Mr Bellew told the court that he never saw a letter from the remuneration committee, dated February 8th, 2019, approving him for options under the 2019 scheme, until it emerged as part the High Court proceedings.

Mr O’Leary convinced Mr Bellew to return to Ryanair from Malaysia Air, where he was chief executive, in December 2017.

Mr Bellew agreed with Ryanair’s senior counsel, Martin Hayden, that Mr O’Leary included details of the non-compete clause in an email to him in October 2017. “But we never discussed it verbally,” he added.

Meanwhile, Mr Bellew said that US safety regulator the Federal Aviation Authority’s refusal to say when it would approve the new Boeing 737 Max for flight spelled further uncertainty for Ryanair, which has ordered up to 210 of the craft.

Regulators grounded the aircraft this year following two crashes blamed on software problems. Mr Bellew said that Ryanair faced extra difficulties as it has ordered a different model, the Max 200, to other airlines, which requires specific safety certification.

Ryanair has reined in growth plans on the back of delays in the delivery of the 737 Max.