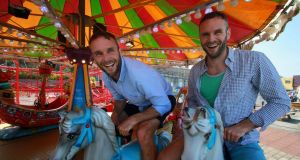 Revenues at the ‘foodie empire’ Happy Pear, led by Greystones twins David and Stephen Flynn, last year increased by 22 per cent to €9.96 million

Revenues at the ‘foodie empire’ Happy Pear, led by Greystones twins David and Stephen Flynn, last year increased by 22 per cent to €9.96 million.

Finance director with the Happy Pear, Paul Murphy said: “We would expect 2019 revenues to be broadly consistent with 2018. We have made strong improvements in profitability in 2019 and expect to be earnings positive for the year.

“The company embarked on a number of large scale projects in 2018, which continued in 2019, with lasting positive impact to the company’s profitability, growth and environmental credentials.”

Mr Murphy said that last year the company delivered growth of 37 per cent on top-line sales year-on-year in its business in the Republic, driven “predominantly by the successful launch of new products through both Musgrave and Independent stores channels”. He said the company also more than doubled sales within its online courses channel.

“Our 2018 losses were principally driven through investment in growth of the business and losses occurring in our export business in the UK with Waitrose, ” he said.

The business this year opened its first outlet at Dublin Airport in partnership with international food service operator HMSHost. The Happy Pear has three other outlets – two in Greystones, Co Wicklow and one in Clondalkin, Co Dublin.

Mr Murphy said: “Our current focus is in respect of improving our existing sites and to continue to grow through our partners HMSHost and Compass Group Ireland.”

The business employs 121 people. It also operates a Happy Pear-branded food manufacturing and distribution business and a successful services business, centred around the provision of corporate health and wellness talks and events. It has also released three best-selling cookbooks, and has more than one million followers on social media.

1 Opioid executive admits to ‘no morals’ ahead of prison term
2 Farmer seeks to challenge €3.6bn Intel plan in High Court
3 Who are Ireland’s 17 billionaires?
4 Council tells Johnny Ronan firm to keep the noise down at D4 Embassy venue
5 South Dublin Credit Union members urged to borrow more to ensure survival
6 Fallon & Byrne founders McHugh and Byrne exit group
7 NI businesses fear burden of post-Brexit red tape on goods transport
8 EU banking watchdog describes rejection of Cross nomination as ‘unfortunate’
9 From chips to €14bn in trade: Ireland and Italy’s enduring exchange
10 ‘If you don’t like challenges, you should not be in the airline business’
Real news has value SUBSCRIBE