Does Ireland’s roaring economy have a soft centre?

We are now in solid recovery mode, but consumers and businesses are looking over their shoulders at the possibility that things can go wrong 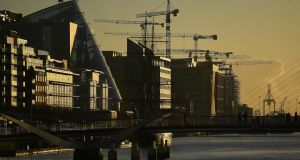 Construction cranes in Dublin. Since 2014 the Irish economy has grown by over 50%, placing it ahead of China in the global growth charts. Photograph: Reuters/Clodagh Kilcoyne

These numbers are off the charts for an industrialised country where growth typically meanders between 1 per cent and 3 per cent in good times.

It means that since 2014 the Irish economy has grown by over 50 per cent, placing it ahead of China in the global growth charts.

In gross domestic product (GDP) terms – though people will rightly quibble about using this metric – the value of the Irish economy is now put at €324 billion, 64 per cent higher than it was at the peak of the boom in 2007.

And despite predictions that 2019 would see a softening, Ireland is almost certain to be the top performing economy in the European Union for a sixth straight year, with growth expected to be around 6 per cent, a multiple of the EU average.

Of course there are caveats. GDP is distorted by multinational transactions and therefore a bad measure of economic activity in Ireland’s case. The jump in GDP in no way reflects the change in household wealth. The global economy is also slowing amid heightened trade tensions, which must – at some point – pass through to Ireland’s export-led economy.

There is also a legitimate fear that the corporate tax windfall currently washing through the exchequer might vanish as quickly as it came, leaving a hole in the public finances.

And there’s Brexit, which has been parked rather than resolved. The likelihood of free trade negotiations between London and Brussels going smoothly is impossible to imagine.

Nonetheless, the Economic and Social Research Institute (ESRI) this week described Ireland’s economic performance as “remarkable” given the international headwinds facing the economy.

“2019 saw the Irish economy demonstrate another resilient performance in the face of significant uncertainty,” it said in its latest economic commentary.

This performance is probably best viewed through the lens of tax and employment. The Government’s tax take for the first 11 months of 2019 was €55 billion, up nearly 7 per cent on last year. That was driven, not just by corporation tax, but by big increases in income tax and Vat, which reflect improvements in employment, wages and consumer spending, signifiers of economic health.

Given the boom and bust of the last decade, these stellar metrics are understandably met with a certain amount of unease. A “what goes up must come down” cycnicism pervades much economic commentary.

Why can’t we be more stable like other countries, is a question that’s posed more and more. Why can’t we trundle along like a typical European economy, growing modestly at 2 per cent, investing in infrastructure and social services while saving for the inevitable downturn in the cycle?

Yes, people are back at work and earning more, but housing and health are festering sores that undermine any positive comment about Ireland’s economic turnaround.

And that’s why the Government is by no means a shoo-in to win the next election despite presiding over the recovery.

“We’re now in solid recovery mode, but it’s backward looking,” says KBC Bank’s chief economist Austin Hughes. What he means is that consumers and businesses are warily looking over their shoulders at the possibility of things going wrong, “rather than looking forward with any great confidence at how much better things can get”.

Again it’s an understandable disposition. “There has been a scarring, psychological and financial, from the crash,” he says.

This tempers our willingness to roll up our sleeves and deal with some of the more deep-rooted problems like housing or health, Hughes says. There’s a tendency to focus on the risks and therefore not plan further than the short term.

“There’s a window of opportunity with corporation tax receipts that’s not being taken,” he says, suggesting the money should be ringfenced for projects rather than drip fed into day-to-day exchequer spending.

The Government’s original plan to channel the excess into a rainy day fund has been watered down. Initially it was to set aside €1 billion every year, starting in 2019, but this was later revised down to €500 million and then deferred altogether because of Brexit.

Hughes says the approach to big issues like housing, health and climate change has been piecemeal. Some will argue that perhaps that has always been the way, but Hughes believes it has got worse since the crash as the focus has narrowed to simply avoiding a repeat of the crisis rather than establishing ambitious plans to resolve major obstacles.

“This isn’t about throwing money at things but having a costed, time-bound programme to deal with housing or health. Instead we tend to get very focused on aiming for, let’s say, a budget surplus of 1 per cent.

“And we hit these targets or miss them almost entirely by accident rather than by design, whereas if we actually focused on the processes we might come up with an economy that was a little more stable and delivered sustainable public finances as a matter of course.”

Hughes says the problem is historical. Up until the mid-1990s the simple rule for public spending was “we’ve no money so you can’t spend on anything”. This morphed into the more cavalier “if I have it I’ll spend it” approach under former finance minister Charlies McCreevy, who presided over the public finances during much the Celtic Tiger years.

Minister for Finance Paschal Donohoe presents himself as the anti-McCreevy, in other words a model of restraint. He often talks about taking a counter-cyclical approach to spending, in other words spending in a downturn while tightening the purse strings during the uptick.

However, the Irish Fiscal Advisory Council (Ifac) has criticised him for doing the opposite, for “repeatedly” breaching his own budgetary targets, and for allowing public spending to advance at an unsustainable rate. By unsustainable the council means out of line with the long-run growth trajectory of the Irish economy, typically put at 3 per cent before inflation.

“What we’ve seen over the last few decades is that, when times are good, governments seem to add fuel to the fire, pushing up growth rates and then, once the boom ends, the subsequent recession is made worse as government retract spending,” says Ifac chairman Seamus Coffey.

“One thing that continental European countries do that we don’t do are multi-annual budgets,” he says “So when a government comes to power they set out their spending plans for four years and, by and large, they stick to that. What happens in Ireland is that we have annual budgets that respond to short-term changes in the economy.

“If more money comes in, as we’ve seen with corporation tax, it will be spent just as quickly, so you don’t have a building up of fiscal buffers that you see in other countries.”

At this stage of the cycle many EU countries are running surpluses much larger than Ireland’s “and the reason for that is that they have this multi-annual approach to budgeting, where the benefits of good times are allowed to accumulate rather than being spent”, Coffey says.

“And then they have the capacity to maintain spending and increase it when the inevitable downturn comes, which is something we haven’t seen here for quite a substantial period of time.”

Coffey says housing is the perfect example of the yo-yo nature of economic activity in Ireland, noting that, back in 2006 and 2007 we were building close to 90,000 houses a year – half the amount being built in the whole of England and Wales – funded by a rapid and unregulated jump in credit.

Fast-forward to 2010 and 2011 and “many people were saying we’d have to knock houses in Ireland, that we had too many”.

“And now with the economy recovering and the return of inward migration, we find we’re not building enough houses. This highlights the lack of stability in our approach to these things. If we’d maintained a stable level of activity, it would probably be much closer to balancing supply and demand.”

However, Coffey dismisses suggestions that the economy is at risk of another meltdown. “Looking at the economy now compared to 2007, there’s no way the risks and the concentration are anywhere near as significant as they were.”

Yet he is critical of the Government’s approach to spending.

“The economy has been performing very very strongly. There’s no case that can be made that the economy needs a fiscal stimulus. Looking at the pace of spending growth in recent years, it is above what could be classified as counter-cyclical.”

“There are some echoes of the past with the reliance on corporate tax so, while the economy might not be as concentrated as it was back in 2006 and 2007, there is potential for the public finances to face a similar concentration.”

Coffey also notes that the exceptional inflow of corporation tax has not translated into an improvement in the Government’s primary fiscal balance. “As quickly as it’s coming in, it’s going back out in the form of additional spending.”

The ESRI believes as much as €6 billion of the Government’s €10 billion corporation tax base could be “temporary” and therefore poses a significant threat to the exchequer.

Looking ahead the economic horizon is dominated by Brexit, and the likely change to Ireland’s trading relations with the UK. The ESRI this week suggested the economy here could ironically get a Brexit bounce if Boris Johnson secures a parliamentary majority in the UK election.

Johnson gambled on an early election in an attempt to win a majority which would allow him take the UK out of Europe by the end of January next year, effectively parking the issue for a time.

“If sentiment suddenly starts to improve again, it could be that you’ll see a pick up in consumption and some of the underlying investment categories,” says the ESRI’s Kieran McQuinn.

While economic growth and employment here has remained strong despite Brexit uncertainty, business and consumer sentiment deteriorated in the second half of this year with the election of Johnson as prime minister and the increased risk of a no-deal outcome to the Brexit negotiations.

McQuinn warns, however, that any Brexit lift could be shortlived if free trade negotiations between the EU and the UK prove bumpy. “There’s a real potential Pandora’s box there – all sorts of difficulties could arise.”