More than 1.7m people tuned in to watch the programme over the weekend 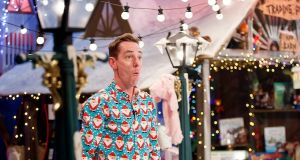 Ryan Tubridy ’We were just bowled over by the children, all of whom came out with these beautiful stories ’. Photograph: Andres Poveda

More than 1.7m people tuned in to watch the programme over the weekend on RTÉ platforms. It was watched live by an average audience of 1.35m, up from 1.3m last year. RTÉ One +1, which airs with an hour delay , had an average audience of 26,000. Figures released by the broadcaster show 134,000 people watched the repeat on Saturday afternoon.

“We were just bowled over by the children, all of whom came out with these beautiful stories and lessons in life and above all else, a sense of kindness and warmth and innocence and childhood, which is the essence of The Late Late Toy Show experience,” Tubridy said in a statement released by RTÉ.

“The numbers are great, and the love and support is reflected in the texts and emails we have been getting from around the country and around the world from people who really seem to have connected with the show,” he said.

There was also a strong online viewership for the Frozen-themed show, up eight per cent on 2018, with 233,000 streams on the RTÉ Player over the weekend from 100 different countries including Estonia, Kuwait and Honduras. It was the first broadcast of the show in Irish Sign Language and this attracted over 28,000 streams.

“ But at its core were the stories and experiences of some remarkable kids; the nation listened, and we witnessed a huge outpouring of support and encouragement across social media. I’m delighted that over 1.3 million people tuned in live for this incredible showcase of talent, diversity, and inspiration. It showed, yet again, that coming together as a community is such a big part of who we are.”