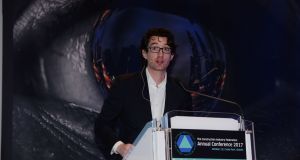 The Currency co-founder Ian Kehoe: ‘We have decided not to appear on Communicorp stations while the ban remains in force against Irish Times journalists.’ Photograph: Alan Betson

Communicorp Media, the radio group owned by billionaire Denis O’Brien, has written to digital media company the Currency to confirm that it has rescinded the ban on its journalists appearing on its stations.

Communicorp chief executive Adrian Serle contacted the online business publication to say its programming teams have been informed that they can “re-engage” with the Currency “when required” and that its editors, journalists and contributors are “welcome on air”.

But a similar ban remains in place against journalists from The Irish Times appearing on Communicorp stations Newstalk, Today FM, 98FM, Spin 1038 and Spin South West.

Ian Kehoe, the former Sunday Business Post editor who co-founded the Currency, tweeted on Thursday that the Currency had sought clarification from Communicorp on the Irish Times ban, as well as both the reason for imposing the ban on the Currency’s journalists and the reason this has now been lifted, but this “has not been provided” by the radio group.

“As a team, we have decided not to appear on Communicorp stations while the ban remains in force against Irish Times journalists,” Mr Kehoe tweeted.

The CEO of Communicorp has written to The Currency stating that it is now allowing its staff to “re-engage” with our journalists and contributors so they can appear on Communicorp stations “when required”.

An email sent to Communicorp staff last September advised producers that journalists from the newly launched outlet could not be invited on air as it was a “competitor platform”.

The ban on Irish Times journalists was originally announced by Communicorp in October 2017 in the wake of a column in this newspaper by Fintan O’Toole that said Newstalk was “systematically sexist”.

The National Union of Journalists has repeatedly flagged its concerns about both bans.

The union has noted that Mr Kehoe and the Currency’s chief executive Tom Lyons have a record of journalism that “has not always met with universal approval, including by individuals associated with Communicorp”.

The issue was raised in the Dáil on Thursday as Sinn Féin introduced a Bill that aims to prevent broadcasters from prohibiting journalists appearing on their stations based on their employer.

The Broadcasting (Amendment) (Protection of Journalism) Bill makes it a breach of contract or a station’s licence to prohibit a member of the National Union of Journalists (NUJ) “from communications media for reason or reasons of occupation, employer, or employment status”.

He said limiting it to NUJ members “creates a certain standard or threshold as to who can or cannot avail of the legislation, if passed”.

Mr Cullinane said the Broadcasting Authority of Ireland “has not made any significant move to address the issue and it is clear that only a change in law will change anything”.

Sinn Féin foreign affairs spokesman Sean Crowe, who co-sponsored the Bill, described it as timely because of the “increased attacks on the rights and freedoms of journalists worldwide”.