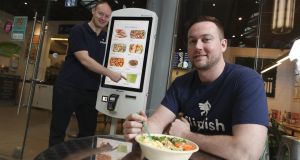 Food-ordering start-up Flipdish is to roll out digital self-service kiosks to restaurants across the State to help reduce waiting times and provide a better customer experience.

The company said it also intends to target bars and cafes with the new kiosks, which allow users to quickly place orders without having to talk to staff.

“The kiosk will never call in sick, speaks several languages, is never rude to a customer, never makes a mistake with change and offers customers quick service when in a hurry,” said chief executive Conor McCarthy, who co-founded Flipdish with his brother James in 2015.

The company, which has positioned itself as an alternative to online fast-food delivery aggregators such as Just Eat and Deliveroo, has invested an initial €1 million in the new technology.

“We’re already installed kiosks in 15 restaurants but there could be a market for up to 5,000 of them,” said James McCarthy.

He said the start-up was in talks with one of the biggest retailers in Europe, which is interested in rolling out the kiosks for use in its supermarket delis.

“Over the last year and a half we’ve seen the likes of McDonalds putting in kiosks into restaurants here and we thought smaller restaurants would like to do the same, not least because customers that use them tend to order more,” said chief executive Conor McCarthy.

“There has been huge interest to date from restaurants we’ve discussed the kiosks with,” he added.

Flipdish employs 90 staff and has raised €7 million to date in funding. Its clients include Chopped, Freshii, Café Sol and Bombay Pantry. The company has about 1,500 restaurants as customers across 12 countries and said it is on target to process €60 million in transactions this year. It expects to more than double this figure in 2020.

The company charges 7 per cent on online orders and has other revenue streams including marketing fees, subscription funds and set-up costs. Kiosk orders are commission free and Flipdish is to charge a flat-monthly fee of €149 per kiosk).

The latest accounts available for Flipdish show that accumulated losses rose to €709,722 for the 12 months ending March 2018.

The company attributed the loss to increased investment in products and headcount and said it is tracking to be cash flow positive in 2020 and remains well capitalised.