Germany needs to walk away from its fear of hyperinflation

John FitzGerald: A euro zone fiscal stimulus is the only way to effectively revitalise the economy 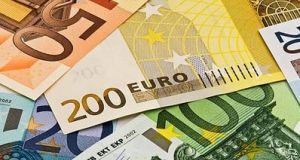 Probably the main channel through which the ECB action has affected the euro zone economy has been through the effect of zero interest rates on the exchange rate. Photograph: Getty Images

Since paper money became the normal medium of exchange, the dream of many a criminal has been to print their own. The US Secret Service was established in 1865 to tackle such counterfeiting, and in most countries printing your own money is a serious offence.

However, this dream of unlimited money has not just been on the mind of criminals. From time to time governments have resorted to printing money rather than paying for goods and services in the less popular but more transparent way of raising taxes.

This “easy” way out has generally proved to be addictive. When governments print money in that way the problem is that more money chasing the same amount of goods generally leads to inflation. As people realise what is going on and expect inflation to continue rising, governments must print even more money to keep up.

The hyperinflation of the 1920s in Germany caused massive economic dislocation. People found themselves collecting their weekly pay in wheelbarrows of banknotes, and if they were not spent the same evening they would be worthless the next day. That chaos contributed to Hitler’s rise to power.

This experience has been repeated by some unwise governments since. A study by McIndoe Calder of the Central Bank has documented the experience of Zimbabwe in the last decade.

Mugabe’s misrule collapsed the local economy in the late 1990s. That led to a massive reduction in tax revenue, and the government deficit was made good by printing more money. However, each year the government had to add another zero or two to the notes to deal with the rising inflation.

By 2008, public servants who were being paid with newly-minted money found that nobody would accept it as the economy reverted to barter or using foreign currency. The golden goose had stopped laying.

The McIndoe Calder paper shows that if the Zimbabwe government had been a bit less avaricious, maintaining some discipline on the printing presses in order to keep inflation at a steady 340 per cent, the government might have avoided the final collapse of the currency.

An interesting contrast with Zimbabwe in the 1990s and the early 2000s was the failed state of Somalia. In 2001, all semblance of government collapsed in Somalia, along with its central bank. With nobody to issue new notes, the old currency began to wear out, giving a further setback to an economy already traumatised by violence.

Groups of businessmen in the capital Mogadishu arranged the forgery of a substantial amount of the local currency. Unlike in Zimbabwe, over the course of the 1990s the businessmen managed the ongoing forgery and release of banknotes in a more “optimal” fashion. They did not suddenly go out and spend the forged notes, but issued them gradually.

Also, while the public could detect what was a “forged” note, they were still accepted as a medium of exchange. However, the public would not accept new notes if a zero was added on to the denomination.

This restriction kept an effective lid on inflation as the value of any new banknotes effectively settled down at the cost of printing them. While the absence of a central bank was not good for the Somalia economy, given that the business community maintained an “optimal” rate of forgery, the local economy began to recover.

The experience in the euro zone today is a far cry from that of Zimbabwe and Somalia. While the ECB has sought to expand the money supply by buying large quantities of government bonds for cash, the public have not responded by spending the excess cash. Instead banks have lent it back to the ECB. The result is negative interest rates.

Probably the main channel through which the ECB action has affected the euro zone economy has been through the effect of zero interest rates on the exchange rate. It has made European bonds less attractive than bonds from other countries, such as the US, weakening the euro exchange rate, and thus providing some stimulus to exports.

However, as Christine Lagarde and her predecessor in the ECB, Mario Draghi, have frequently emphasised, a euro zone fiscal stimulus is the only way to effectively revitalise the economy.

With German folk memories of hyperinflation still strong, this is something they have resisted. Yet clearly we are living in a very different world from the 1920s.