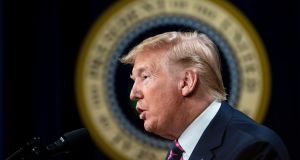 US stocks hit record highs on Thursday after US president Donald Trump tweeted that Washington was “very close” to a trade deal with Beijing and on a report that US trade negotiators had offered to cancel a new round of tariffs on Chinese goods.

In Europe, the European Central Bank said it would maintain bond buying and keep rates low until it gets near its inflation goal. The euro rose and bonds in the region slipped. The Swiss franc nudged higher after the central bank left rates unchanged.

The Iseq, typically sensitive to Brexit news, rose 0.6 per cent as the Conservatives appeared to be still in with a chance of a decisive majority in the UK election.

Bank of Ireland rose 4.7 per cent to €4.98 per share, as euro-zone banks enjoyed their best day in two months after comments by new ECB chief Christine Lagarde.

At her first meeting as president of the ECB, Ms Lagarde said she was neither a policy hawk nor a dove but an owl who will use her wisdom to heal a recent rift in the governing council. She also said the bank expects in January to begin a strategic review of how it does business.

The internationally focused FTSE 100 index and an index of more domestically focused firms both firmed around 0.7 per cent.

Despite earlier holding strong, sterling slipped as traders booked in profits, helping prop up exporter stocks, while utilities such as Severn Trent, which run the risk of re-nationalisation under a Labour government, dipped.

John Laing fell 10 per cent among midcaps on its worst day ever, after the infrastructure firm said it expected annual net asset value to miss market estimates.

Balfour Beatty rose 4.3 per cent after forecasting annual profit ahead of its estimates and electricals retailer Dixons Carphone jumped 7 per cent as it maintained its full-year outlook.

The pan-European Stoxx 600 index closed up 0.3 per cent as euro-zone banks rose 2.8 per cent, with investors taking comfort from Ms Lagarde saying she was aware of the side effects of the European Central Bank’s unconventional monetary policy.

Bank-heavy indexes in Italy and Spain rose 1 per cent and 0.8 per cent respectively.

Trade-sensitive German shares rallied 0.6 per cent after a report saying Washington had offered to cancel tariffs set to take effect on Chinese goods on December 15th.

Anheuser-Busch InBev weighed the most on the Stoxx 600 after Australia’s competition regulator said the Belgian brewer’s $11 billion asset sale to Japan’s Asahi could hurt competition in Australia’s cider sector.

The Federal Reserve kept interest rates steady on Wednesday and pointed to a “favourable” economic outlook next year. Only defensive plays such as real estate, utilities and consumer staples were trading lower, suggesting heightened risk appetite among investors.

Shares of Delta Air Lines rose 3.3 per cent as the carrier forecast a rise in profit and revenue in 2020. – Additional reporting: Reuters/Bloomberg