Caveat: Aldi and Lidl have focused on consumers looking to ‘premiumise’, and you don’t do that unless you’re feeling good 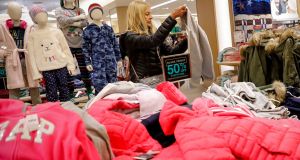 Reality has hit home among Irish consumers that wages are rising and full employment is back. Providing Brexit is sorted without killing the economy, things aren’t so bad after all

Each year for the last several years we have gone to the same location with the children to see Santa Claus: an old manor estate on the outskirts of Dublin. This year, however, something felt different.

In years past, with the more austere feeling of recession still a recent memory, the visit always felt like a meaningful day out. It was never overly commercial. The focus of the experience created by the organisers was on making art with the children before arranging the VIP encounter that was the raison d’etre of the entire trip.

The roles of Mrs Claus and the Big Man himself were usually played by what sounded like thespian actors, full of character. Although this is a handsome manor estate, the meeting between the children and Santa took place in a drafty old outhouse. Nothing fancy, just logs for chairs and beakers of milk.

The whole experience felt about as real as an encounter with Santa could be. There was a quirky, odd authenticity to it. Sometimes, however, such things are usurped by their own success.

This year, in order to secure a weekend date in December, we realised we would have to book the visit at the beginning of the school year. The fact that we were even thinking of Santa and Christmas more than three months ago is an indication that our minds were already attuned to the growing sense of consumerism in the air. People are more conspicuous in their spending. We knew it would be booked up quickly this year, and it was.

Even three months ago most of the good slots were already gone, but we managed to secure a reasonable time on a weekend date.

It was far from cheap: €25 for each child, which is expensive but justifiable, and €12.50 for each adult, which is just plain expensive. The adults are only there to walk their kids through the experience safely. Why charge for that? A fee of €75 for a family of four to visit Santa is very 2006.

The focus was still ostensibly on making art with the children, but the atmosphere had changed. There were far more children rammed in for each time slot than in prior years, as if somebody somewhere has discovered the concept of yield management.

The visit with the Main Man was no longer in a simple outhouse; instead it took place in the splendour of the manor house itself, perhaps in an effort to impress or to justify the prices. Thespian Santa and Mrs Claus were gone, replaced with more prosaic, and presumably more cost efficient, versions. There was a new, cool efficiency to the whole experience. It felt a little like a business transaction, a consumer exchange.

But then again isn’t that what a normal Christmas is – a series of consumer transactions? Any lingering memories of recession have gone and consumers are back to normal. Our new, less romantic, more commercial Santa visit merely reflected that reality.

Irish consumer confidence has been artificially constrained in recent years only by the fear of a crash-out Brexit. A Tory party victory in this week’s UK election, and the certainty that it would bring to efforts to pass an orderly withdrawal agreement, would help to dispel any lingering hesitation among Irish consumers.

Recent numbers from the ESRI and Ibec show the latent confidence that exists in Irish consumers. The ESRI/KBC consumer confidence index rose sharply in November, spiking from artificial lows on the back of the deal struck between the UK and EU.

Reality has hit home among Irish consumers that wages are rising and full employment is back. Providing Brexit is sorted without killing the economy, things aren’t so bad after all.

Retail sales are up 3 per cent. Irish consumers are shaping up to spend €5 billion this Christmas on “stuff”. Households will spend at least an extra €940 over and above their normal monthly expenditure, up sharply from a couple of years ago.

The (often exaggerated) shift to online shopping is admittedly making life difficult for some traditional retailers, but others have adapted to tap into the mood.

It won’t be rolled out in time for Christmas, but, for example, Arnotts and Brown Thomas will introduce digital personal shopping for their customers in the new year. Customers will be able to log on digitally from home and have video calls with retail workers on the shopfloor, taking consumer interaction up a notch. In leaner times that would never fly. Consumers would be too afraid they would be upsold.

But it is perhaps at the low-grocery retailers, Aldi and Lidl, for so long associated with austerity and discounting, where we can really gain some of the keenest insights into the current mindset of Irish consumers.

Both supermarket chains, armed with reams of up-to-date consumer behaviour data, are making a huge push this year to target consumers looking to “premiumise”.

You don’t go for premium unless you’re feeling pretty good about things. The discount retailers want you to buy an expensive goose instead of a cheap turkey crown. Instead of soup for a starter, they will offer you scallops. Instead of unpronounceable paint stripper, they’re offering craft beers and good wines.

Irish consumerism is back, and it isn’t afraid to assert itself. Businesses are cashing in. It might make for a less poetic visit to Santa. But it’s still better than a recession.

– The tourism industry has more ammunition for its argument that the sector is vulnerable at a time of Brexit uncertainty. The numbers travelling through Dublin airport last month dipped for the first time in five years.

Recent State figures from the CSO also show that spending is down this year from most of Ireland’s most important tourism markets, such as the UK and Germany. The sector appears to have peaked. What next for Irish tourism?

– Feedback from tourism attractions is not universally negative, however. Kylemore Abbey, the 1,000-acre estate and walled gardens owned by Benedictine nuns in Co Galway, recorded a 6 per cent increase in revenues last year to more than €8 million as visitor numbers surged to 560,000.

The estate made profits of about €1.65 million, double where they were the year before. As a tourist attraction, Kylemore Abbey estimates that it generates about €60 million for the local economy.

Things are going so well the Benedictines are building a new monastery at Kylemore. Construction kicked off in September. Not a bad way for the nuns to celebrate 100 years onsite in 2020.

1 Retailers accused of ‘stealing business’ from rivals by flouting restrictions
2 Outgoing Irish a sitting duck for Covid
3 How long can Government afford to keep State pension age at 66?
4 In praise of Gogglebox Ireland, an essential service in all but name
5 Intercom CEO Karen Peacock: ‘I do miss seeing people live’
6 Paul Coulson’s big bet on cans leaves Ardagh disciples waiting
7 ‘French people are pretty relaxed. They don’t pander to scaremongering or hysteria’
8 Nama grants Ronan four-month extension on €160m glass bottle site deal
9 Goldman Sachs in talks to take over Blanchardstown shopping centre
10 How can I view my dead brother’s will if I’m not the executor?
Real news has value SUBSCRIBE