Aircoach profits down due to driver intake and wage pressures

Revenue up for airport transport provider, as passenger numbers and routes increase 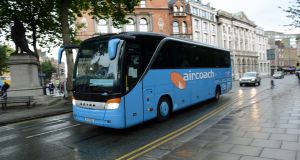 Inflationary wage pressures and the recruitment of new drivers contributed to pre-tax profits at private coach operator Aircoach decreasing by 24 per cent to €4.7 million last year.

Last Passive Ltd recorded the drop in pre-tax profits in spite of revenues increasing by 5.6 per cent from €25.18 million to €26.59 million in the 12 months to the end of last March.

The directors state that an increase in inter-urban route services drove the increase in revenues and passenger numbers.

Aircoach’s services include a high-frequency service to and from Dublin city centre and Dublin airport and towards the end of the year, the company added new vehicles to the company’s Belfast route.

On the drop in profits, the directors state that “driver costs rose significantly, partly due to inflationary wage pressure but principally due to the necessity to restore driver numbers to cover additional routes provided”.

The directors state that there was also a higher than normal training cost of new drivers throughout the year and this was partially offset by a reduction in staff numbers across other areas of the business.

The directors state that they remain confident that the company’s activities will generate a satisfactory result in the coming year.

The directors state that 2019 will be a changing year for public transport in Ireland as the first of the National Transport Authority local bus tenders starts to operate.

They state: “The success or otherwise of this happening is likely to have a significant impact on the future of public transport operations in the country.”

The directors also state that the Dublin Airport Authority remains a key partner with both the bus-stop terminal tender and car-park tenders up for renewal in the year.