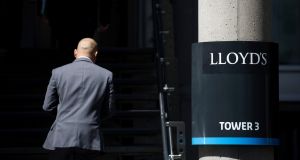 The move is the first big appointment from new chief executive John Neal, as he starts to build his top team.

The insurance market announced in May last year that John Parry would step down from the CFO position after five years in the job.

Mr Keese has been CFO of Allianz’s German business since 2012, helping to implement the EU’s Solvency II capital rules and overseeing a €300bn investment portfolio.

Mr Keese said it had been a “tough decision” to leave Allianz Deutschland, but added: “For 330 years Lloyd’s has been taking on the world’s risks and that longevity demonstrates its enduring relevance . . .I’m thrilled to be given this opportunity.”

He will take up the new job in April.

Mr Neal is still looking for a new chief operating officer for the market, after Shirine Khoury-Haq announced her intention to leave in November.

Mr Neal, who joined in October, is starting to lay out his vision for the future of Lloyd’s. In an interview last week, he promised to cut costs, increase the use of technology and win more business. – Copyright The Financial Times Limited 2019