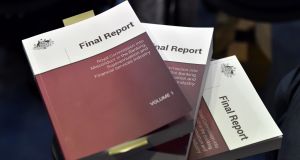 Australia’s royal commission into its banking and finance industries was a long time coming. In 2009, the Australia and New Zealand Banking Group paid hundreds of millions of dollars in a settlement to investors.

For years after that, there were regular reports about sharp practices at financial institutions and hundreds of millions of dollars was paid in compensation to customers and investors.

Finally, in April 2016 opposition Labor leader Bill Shorten said: “Scandal after scandal, enough is enough. There needs to be a royal commission [into banking].”

The Liberal-National coalition voted down a Bill to bring about a royal commission 23 times, but eventually relented in December 2017 when some of its backbenchers threatened to cross the floor.

The commission heard shocking evidence of unethical behaviour. Dead people were charged fees on their accounts. An insurance policy was sold to a man with Down syndrome.

Aggressive cold calling was often used to target vulnerable clients and sell them policies they did not need or that would have been difficult to claim on.

And now, with the final report of the royal commission, the chickens have come home to roost and banking in Australia will never be the same again.

Commissioner Kenneth Hayne’s report excoriated a sales culture that resulted in poor outcomes for clients. “Providing a service to customers was relegated to second place. Sales became all important,” he said.

“Rewarding misconduct is wrong. Yet incentive, bonus and commission schemes throughout the financial services industry have measured sales and profit, but not compliance with the law and proper standards.”

Several institutions are likely to face criminal charges, while many others have been referred to the corporate regulator, the Australian Securities and Investments Commission, for further investigation.

The report recommends that commissions should be largely eliminated from the financial sector, including mortgage broking, financial planning and insurance sales.

Though it was made public on Monday, the final report was handed to the government on Friday in an excruciating ceremony where Hayne refused to shake the hand of the treasurer, Josh Frydenberg.

Responding to the report, Frydenberg said the government would take action on all of the commission’s 76 recommendations, “and in a number of important areas is going further”.

“My message to the financial sector is that misconduct must end and the interests of consumers must now come first,” he said. “From today, the sector must change, and change forever.”