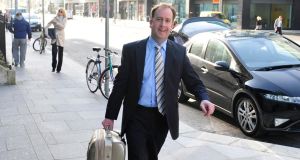 Wexford accountant Alan Hynes has had a costs order of €550,000 made against him after his membership of Chartered Accountants Ireland (CAI) was revoked.

At a costs hearing on Friday of a Chartered Accountants’ Regulatory Board (Carb) disciplinary appeals tribunal, the original costs order of €500,000 was affirmed and costs of €50,000 in relation to the appeal awarded against him.

“The tribunal will be aware of the very extensive preparation that has had to be conducted in preparation for the appeal both in terms of the case management hearings and the fact the matter was listed before you for a period of six days,” said Carb’s case presenter, barrister Ronan Kennedy.

“Clearly, Mr Hynes has had the opportunity to provide any information or evidence that he wished to present to you in relation to his own financial circumstances as they stand at the moment and he’s chosen not to do that,” Mr Kennedy added.

Anthony Aston, the chairman of the appeal tribunal, said the board acceded to Mr Kennedy’s request for €50,000 associated with the appeal despite having seen estimated costs “well in excess of €50,000”.

Mr Aston pointed out that the original award of €500,000 against Mr Hynes seemed to be a “rather large sum”, “but nobody has made any application to us that that should be varied and there’s no basis for us to interfere with that sum”.

The appeals tribunal heard on Friday that a series of correspondence had been received from Mr Hynes since it effectively revoked his membership of CAI on Monday morning.

In one email, signed off by a person called Jim Wallace and sent to a member of the Garda Síochána, there was a reference to a matter being dealt with by the Director of Public Prosecutions. A request that “all of the assets seized should be returned immediately” was made in that email dated February 5th.

The correspondence also made reference to High Court costs which were awarded to Mr Hynes when he was originally denied an appeal of his disciplinary action.

“It appears that Mr Hynes hasn’t got the message . . . that this tribunal isn’t dealing with the High Court costs,” Mr Kennedy said. “It’s hard to see how that position could have been made more clearly.”

The original award of costs against Mr Hynes was made in March 2015 after multiple findings of professional misconduct were made.

The originally-constituted Carb tribunal found multiple instances of Mr Hynes being involved in conflict-of-interest situations that he did not adequately deal with.

Among the criticisms made in the findings against Mr Hynes were “egregious” breaches of the institute’s code, “unmitigated failures” in relation to his dealings with clients, and “unconscionable behaviour” in relation to clients whose money he dealt with.