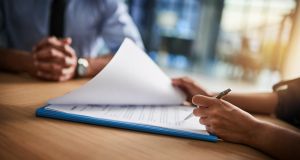 The board decided to sell the self-contained financial planning division because there was little overlap between its client base and the rest of the business. Photograph: iStock

Arachas Corporate Brokers, an acquisitive Dublin-based general insurance provider, is putting its financial planning division on the market as it seeks to unlock funds to invest in its main business.

Sources said that the company, whose name is Irish for insurance, has hired AIB Corporate Finance to run a sales process for the unit, which is said to have €150 million-€175 million of assets under advice or management. They declined to to put a value on the business, which is backed by UK private equity firm Sovereign Capital.

The unit accounts for 15 of Arachas’s 250 employees. The company, established in 2004, has made three acquisitions – Kidd Insurances, Capital Cover Group and Clover Centre Insurance – since it was the subject of a Sovereign-backed management buyout deal in early 2017.

It is understood that the board decided to sell the self-contained financial planning division because there is little overlap between its client base and the rest of the business, resulting in limited opportunities for the cross-selling of products. The process is expected to take up to eight weeks.

Insurance executive Conor Brennan left Zurich Insurance early last year to take over as head of Arachas, succeeding Donal Cronin, who committed to retaining his 23 per cent stake in the business, making him the largest shareholder, behind Sovereign Capital’s 54 per cent interest.

Mr Brennan said last year that he would continue the company’s acquisition drive in a consolidating sector.

The company was formed in 2003 through the combination of Cork-based broker Tyrrell Coakley with two Dublin peers, Hodgins Percival and Slattery Jermyn.

The most recent set of accounts for Arachas Corporate Brokers Ltd shows that its turnover rose to €18.2 million in 2017 from €17.2 million a year earlier, according to Companies Registration Office filings. However, pretax profit declined to €1.29 million from €2.28 million, as expenses increased.

Meanwhile, as the wider insurance industry prepares for Brexit, the Government is advancing legislation to allow UK- and Gibraltar-based insurers and brokers to continue to service Irish customers policies for a period of up to three years in the event of the UK crashing out of the EU without a withdrawal agreement.

4 Should I buy an investment property or save for my dream home?