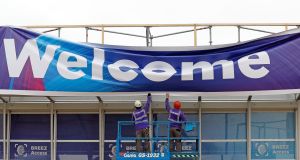 A British property company sought a concession from the Government to avoid a tax bill of up to €65 million on a significant deal it had struck in Ireland. Henderson Park was hit with the tax bill on its €1.34 billion purchase of an Irish company, Green Reit. Jack Horgan-Jones has the details.

Bank of Ireland’s chief executive has told a meeting of business leaders that the country must “build up” with taller apartment blocks in Dublin and other cities to solve the housing crisis.

Closer to home, Facebook has halted the European launch of a dating service after a row with the State’s Data Protection Commission (DPC), which expressed “concerns” and “inspected” the social media giant’s Dublin offices seeking details.

Dalata, the country’s largest hotel group, has struck a deal with the GAA to operate a new 200-bedroom hotel beside Croke Park on lands acquired from the Catholic church.

It comes as plans by Premier Inn owner, Whitbread, to open more than 2,500 hotel rooms in Ireland have stepped up a gear with the announcement of its fifth site in the capital.

In our tech and innovation coverage, Peter McGuire considers when the big breakthrough in AR/VR will occur, Chris Horn discusses the problems facing the crumbling US mobile phone infrastructure, and we look at clean energy’s dirty little secret when it comes to wind turbines.

Finally, in the Net Results column this week, Karlin Lillington asks are app ride services taking us in the right direction?

1 Life as a Facebook moderator: ‘People are awful. This is what my job has taught me’
2 Suspicions rife as key Brexit trade talks begin in Brussels
3 Corona beer firm reeling after 8% slide due to coronavirus
4 Irish companies restrict travel over coronavirus fears
5 Coronovirus panic sweeps through global markets
6 Coronavirus: Iseq down 11% in five days as global sell-off is worst week since 2008 crisis
7 ‘The only time apartments were viable was in . . . Ballsbridge, Killiney and Dalkey’
8 Pharma giant AbbVie warned Government against ‘unfair’ €572m tax bill
9 How well paid do you think you are? Here’s how to work it out
10 Teva launches State’s first inhaler recycling programme
Real news has value SUBSCRIBE