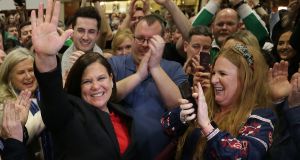 DBRS Morningstar, in a commentary on Ireland, said 2020 could prove to be a “pivotal year” for the Republic.

Election 2020 is likely to result in “another centrist government” but the increased demand for spending on health and housing will “present challenges” for the new government, according to a ratings agency.

DBRS Morningstar, in a commentary on Ireland, said 2020 could prove to be a “pivotal year” for the Republic.

“Ireland’s credit quality has improved over the last few years due to strong macroeconomic performance, and DBRS Morningstar does not expect this to change following the February 8th, 2020 elections,” it said.

“Despite the three-way tie among the main political parties, the election will likely result in another centrist government.

“However, the election results point to an electorate demanding more public spending, especially in healthcare and housing, and Sinn Féin’s strong election performance points to an intensification of the debate around Irish re-unification.”

The agency said these factors will present “domestic challenges” for the new government.

At the same time, it continued, Ireland’s sovereign ratings “remain sensitive” to a set of potential external risks that lie outside of its control.

“Principal among them is the potential social and economic fallout from the UK’s decision to exit the European Union,” said the commentary.

“The UK’s formal withdrawal from the EU allows for an orderly initial exit, but risks to Ireland are not likely to dissipate until there is permanent clarity around the UK-EU relationship.

“Given that there is less than a year for both parties to negotiate the complex future relationship, the risk of no-deal remains a possible outcome,” it said.

“Fallout for Ireland from a no-deal Brexit would be considerable on several fronts. forecasts estimate loss to the Irish economy in the range of 2-8 per cent by 2025 in a no-deal scenario compared to a no-Brexit baseline.”

Likewise, the pending changes to global tax policy could also “alter in a meaningful way” the State’s comparative economic advantage.

“After a decade of global economic growth, Ireland faces the risk of a slowdown in the US economy and the global economy generally.

“This could be exacerbated by ongoing shifts in US-EU trade policy, given the importance for Ireland of foreign investment from the US.”

DBRS Morningstar said it would consider upgrading the ratings of the Republic when it “better understands its resilience to external risks”.

“This includes evidence that authorities appropriately navigate the external challenges discussed in this commentary without a material derailment of progress in macroeconomic performance,” it said.

“Improvement in DBRS Morningstar’s view of debt sustainability to more moderate levels on the back of sound fiscal management could also spur upward rating action.

“Conversely, the trend could revert to stable or the ratings could face downward pressure, if material downward revision in the growth outlook or a weakening in fiscal discipline cause public debt dynamics to reverse course.”