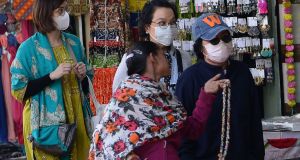 Tourists in New Delhi this week. “We’re seeing a rippling out,” said Ed Morse, global head of commodities research at Citigroup in New York. “And we don’t see it stopping.” Photograph: AFP via Getty

In Australia, after hauling hundreds of thousands of tons of iron ore to China, returning freighters can face a 14-day quarantine before being able to reload. BHP, which has headquarters in London and Melbourne and is one of the world’s largest copper mining companies, has been in talks to possibly delay shipments to Chinese ports.

And from Qatar to Indonesia, exporters of liquefied natural gas face the prospect of disrupted shipments after a crucial importer in China is reportedly turning back deliveries after invoking clauses in long-term contracts that blame a “greater force”.

The coronavirus outbreak in China has generated economic waves that are rocking global commodities markets and disrupting the supply networks that act as the backbone of the global economy.

“We’re seeing a rippling out,” said Ed Morse, global head of commodities research at Citigroup in New York. “And we don’t see it stopping.”

Prices for key industrial raw materials such as copper, iron ore, nickel, aluminium and liquid natural gas have plummeted since the virus emerged. Currencies of countries that export these goods at high rates, including Brazil, South Africa and Australia, are near their lowest levels in recent memory. And manufacturers, mining companies and commodity producers of all stripes are weighing whether they will be forced to cut back on production for fear of adding to a growing inventory glut.

The woes of the commodities markets – arguably the worst-performing asset in financial markets this year – reflect the basic reality that China’s industry-heavy economy is the most important consumer of raw materials on Earth. And drastic efforts to quell the outbreak, including a lockdown of Wuhan, a city of 11 million, and severe curtailment of transportation nationwide, have slowed the Chinese economy sharply.

JP Morgan economists now think China’s economy will grow at a pace of just 1 per cent in the first quarter, well down from an initial forecast that anticipated a peppy 6.3 per cent rate. The slowdown will be most pronounced in the industrial sector. Most Chinese provinces had extended the Lunar New Year holiday and kept factories closed until Monday in an effort to contain the virus. Some have reopened, but it could be weeks or months before production can fully ramp up.

That is a major challenge for the supply chains that have developed in recent decades to deliver a constant supply of the materials that make Chinese factories hum. Commodities markets have tumbled as those factories idled. Iron ore is down more than 10 per cent this year. Copper is down about 8 per cent, as is nickel, a key ingredient for stainless steel. Zinc and aluminium are both down more than 5 per cent in 2020.

“There is a big drop in consumption, and you need storage space,” said Harry Tchilinguirian, head of commodity strategy at French bank BNP Paribas, in London. “And if you don’t have storage space that’s one of the reasons why the buyers have invoked this clause.”

One of China’s largest importers of liquefied natural gas, China National Offshore Oil Corp, or CNOOC, was one of the entities to invoke a “force majeure” clause, according to multiple news reports. Asian gas prices tumbled in response; benchmark prices for North Asian liquid natural gas are down more than 30 per cent in 2020.

Copper prices have also been tested as China’s construction and automotive industries have stalled. BHP said it was monitoring the situation and was “working closely with our copper customers” as they returned from the holiday. For some, the decline in copper is an ominous sign: copper has long been considered an unofficial leading indicator of the direction of the global economy, because of its close connection to the industrial sector.

On Tuesday, the Federal Reserve chair, Jerome Powell, told House of Representatives Financial Services Committee members that the central bank was “closely monitoring the emergence of the coronavirus, which could lead to disruptions in China that spill over to the rest of the global economy.”

Whether the downturn is a blip or a serious shock is as much a question of epidemiology as economics. If the spread of the virus starts to slow – as many expect it will – commodities will most likely rebound as production returns to normal and inventories that have been built up over the past few weeks gradually shrink. “A lot of what’s happened in some of these commodity prices is more speculation that it gets worse before it gets better,” said John LaForge, head of real asset strategy at Wells Fargo Investment Institute. “My guess is that commodity prices bounce pretty quickly.”

Others are not so sure. Mr Morse, at Citigroup, said several key markets such as crude oil had already been showing softness, suggesting that the global economy was weak even before the virus hit. That could complicate any quick rebound for commodities prices.

“The market has been thinking that there’s going to be a V-shaped recovery at some point,” he said. “And we don’t think that’s in the cards.” – New York Times service