It’s 2020, so where’s our virtual and augmented learning? 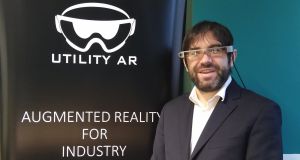 Patrick Liddy, founder of UtilityAR, says that he expects to see AR glasses released by the big mobile phone companies within the next three years

Augmented and virtual reality holds great promise for education. In schools, it could allow students conduct science experiments without science labs; in workplace training, new platforms like Mira could allow remote guidance when, for instance, engineers are working in the field.

Seeing is Believing, a new report from PwC economists in the United Kingdom, says that AR and VR could deliver a $1.5 trillion (€1.4 trillion) boost to the global economy by 2030, including a $294 billion (269 billion) boost to global GDP by supporting education and training when it is not always practical or safe to do in the real world.

Here, PwC’s technology partner David Lee says that organisations need to think about how AR and VR could fit into their business, or risk being left behind.

Virtual reality creates a computer-generated, artificial simulation of a real-world experience by stimulating vision and hearing, with big beasts including Sony and HTC hoping to grab a chunk of this growing market. Augmented reality does not replace vision but instead projects images over what the user sees; popular uses of AR include Pokémon Go and Snapchat.

And yet, despite the great promise of AR and VR in the education and training sector, it hasn’t taken a firm hold yet. If it could transform education, are all the biggest players in tech throwing billions at taking control?

Martin Duffy, director of data and analytics advisory at PWC, says that he expects AR and VR to become mainstream in workplace training within 12-18 months, but adds that the investment required at primary, second and third-level could slow down progress.

“The barriers include the price point and the need to have special hardware. Oculus Rift, bought by Facebook in 2014 for $2 billion, is mainly used for online gaming but can also be used for educational programmes. But it requires hardware that costs about €400-500.”

Gareth Lee is the skills development manager with Screen Skills Ireland and the Network Director with Animation Skillnet."

“Learning is more memorable when experienced,” he says. “Remember field trips? Go anywhere in the world, and meet anyone through VR. Experience history and events from the past. Bring experiences that are out of the reach of most people to everyone, such as space travel. It also gives people experiences that would be otherwise out of reach to them for reasons including disability or geographical location.

“But if you think about how long tablet computers and iPads have been around, they haven’t really ‘taken hold’ in education, even though there would seem to be a clear value proposition for them,” he adds.

Undoubtedly – and properly – educators may be wary of adopting new technologies for the sake of change and without compelling evidence, particularly as the use of tablets in schools has proven so controversial in Ireland: in January, after much concern from parents and the issue being widely covered in the press, Ratoath College in Meath dropped its iPad-only policy.

“The cost of the technology and its newness are barriers,” Lee says. “It’s also still quite costly to produce VR content and the equipment means a big investment for schools, which are increasingly operating on tighter budgets. And the cost of one headset per person is high, so scalability is an issue. That said, AR is accessible through smartphones and could be more widely used in education.”

Entrepreneur Patrick Liddy is the founder of UtilityAR, a Dublin-based software company focused on utility and life sciences in Ireland and the UK. UtilityAR provides engineers and technicians in manufacturing and utility industries with augmented reality glasses.

“I believe that there is a big disconnect in our society where it comes to matching available under-experienced young people and the need for experienced technical workers in to deploy the smart devices, energy efficiency measures and the improved communications equipment we expect in the modern world,” Liddy says.

“The under-employment of many workers is causing all sorts of societal and political problems. The under-availability of skilled workers is delaying the rollout of these important technologies. AR and VR are new exciting tools which allow workers to be trained more quickly , provided with better procedures while they are doing the work, and guided remotely by their more experienced colleagues. These technologies can help reduce the experience gap and make the world a much better place.”

Liddy says that there have been many examples of technologies failing on multiple occasions before finally finding success. “Smartphones, internet video and ride sharing are all examples which had to wait for their time. While this success can only take place when the technology has matured, other issues relate to finding the correct market, consumer acceptance, and business execution are important. At UtilityAR, we believe that by starting in the enterprise space, like mobile phones and PCs, the technology will be embraced by those who get the most value from it, and become normalised and so accepted by the general public.”

Liddy believes that, when people become accustomed to seeing electricians, mechanics and plumbers wearing the technology in their daily work, it will become normalised and grow rapidly.

“Currently the equipment is expensive, hard to procure and totally uncool. There is also a shortage of software that is intuitive and easy to use. This is changing however and as the market grows the number of companies providing these experiences will fill the gap.”

Lee, meanwhile, is currently involved in establishing a new immersive technologies skillnet network that will provide education and training for the immersive technology sector in Ireland to include VR, AR and games. “AR and VR for education in schools is one thing, but AR and VR for high hazard, remote or risky environments – including aviation, defence, security, energy generation and manufacturing is another,” he says. “As we live in a world of ever-decreasing resources, VR allows for training without the need to physically use these resources.”

AR and VR: what’s here now and what’s to come

“It involves installing a phone app and buying a headset, which costs about €150, that clips to the phone. It doesn’t require expensive machines and so becomes a truly mobile experience. The headset projects an image onto a screen, which can be navigated and explored by eye movements. It could allow remote training, enabling trainees to play, rewind and pause challenging instructions while continuing with the task in hand. Their progress can be monitored and assessed.

Another piece of Mira’s functionality, Remote Expert, can allow a team member to connect remotely with an expert, who can see the same view and provide instructions on the next steps.

Patrick Liddy, founder of UtilityAR, says that he expects to see AR glasses released by the big mobile phone companies within the next three years.

“Apple, Huawei and Samsung expect AR glasses to first work with your smartphone, and ultimately replace them. When the hardware is so widely available, we will begin to see extremely interesting applications. Glasses could identify the bird that is on the tree, the type of flower you are looking at or the food you are eating. It will also show you how to assemble your Ikea furniture, change the filter in your car, and bake a cake. Contextually relevant information at the right time will go a long way educating people more quickly and when you need it.”

Liddy says that the big tech firms may not have taken over this space because splitting hardware and software has become the norm in consumer tech. But Gareth Lee of Animation Skillnet points out that Facebook has invested billions in VR and are one of the market leaders, with the Oculus Quest headset sold faster than it can be manufactured.

“And Google’s ‘Adopt a Startup’ programme, which offers mentoring and sponsorship to companies with high-growth potential, has included companies in this space. In general though, Google is not a training or entertainment company, although they have invested heavily in Magic Leap, which makes AR headsets.”

1 How to gift your child a house deposit . . . tax free
2 BOI customers to be charged twice with bank fees on New Year’s Eve
3 Irish designer of Oxford vaccine: ‘I’ve never worked so hard in my life’
4 Digital bank N26 targets one million customers in the Republic
5 Workers have little idea of the cost of retirement income
Real news has value SUBSCRIBE