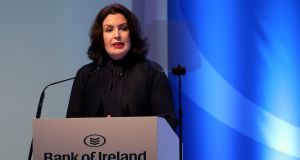 Francesca McDonagh: “We need to have a more honest and open debate about building up”. Photograph: Laura Hutton

Bank of Ireland’s chief executive has told a meeting of business leaders that the country must “build up” with taller apartment blocks in Dublin and other cities to solve the housing crisis.

“We need to revisit in Ireland how we plan our housing, how we zone and how we build,” said Francesca McDonagh, addressing an Ibec conference in the Convention Centre Dublin. “We need to build up.”

She said housing was the issue that “absolutely dominated” the recent general election, and that to solve it, Irish building needs to “speed up and look up”.

The former HSBC banker said she had lived and worked for most of her life in cities with high-rise buildings. She said that when she moved to Dublin to take over the top job at the bank in 2017, she was surprised by the city’s “sprawl and the flatness of the skyline”. She said the city “sweeps” into the neighbouring counties of Louth, Wicklow and Meath and “it doesn’t stop there”.

A city should have “the most options in the least space,” she said.

Ms McDonagh highlighted that the expected demand for new homes in the State by 2040 could exceed 500,000 units, and that Ireland’s economy and population is likely to grow much more in coming years, fuelling demand.

She pointed to a recent report by stockbroking firm Goodbody that noted apartments represented only 17 per cent of home completions in 2019, compared to a European average of 59 per cent.

Ms McDonagh said the lack of high-rise residential options close to the city centre means many people must spend long distances travelling from the outskirts to get to work: “That is simply not sustainable. Without changing our approach, we are pushing another generation away from the capital and condemning them to long, energy-sapping, expensive, time-consuming and oil-guzzling commutes.”

She said the bank has commissioned research on the type of housing Ireland needs over the next two decades, and it will release the results later this year: “We need to have a more honest and open debate about building up, with higher rise high-density accommodation...”

Ibec chief executive, Danny McCoy, referred to the recent election result and also Brexit, and said a “new economic order” had been created here and in the UK. Calling for more public investment in infrastructure, housing and public services, he said “business has grown too big and too fast for society to be able to absorb”.

He said the State needs to invest as part of the “under-pinning” of economic growth.

Mr McCoy also reiterated his call for a new process of “social dialogue” between the next government, civil society and worker and business groups to discuss how to solve social and environmental problems. He called for a new commission on taxation. “Calm is required. Markets work, but we have to acknowledge the context in which developments” take place, he said.

While not suggesting that Ireland should consider leaving the European Union, Mr McCoy also said the country needs to have a debate about the governance of the bloc. He said many people here considered the British “mad” for leaving: “What if they weren’t? What if they got out in time?”