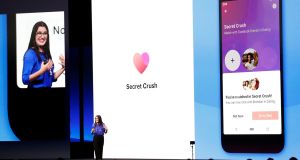 The DPC says it was notified on February 3rd that Facebook intended to launch the dating service this Thursday, a day ahead of St Valentine’s Day. Photograph: Reuters

Facebook has halted the European launch of a dating service after a row with the State’s Data Protection Commission (DPC), which expressed “concerns” and “inspected” the social media giant’s Dublin offices seeking details.

The DPC says it was notified on February 3rd that Facebook intended to launch the dating service this Thursday, a day ahead of St Valentine’s Day.

“We were very concerned that this was the first that we’d heard from Facebook Ireland about this new feature, considering that it was their intention to roll it out tomorrow,” said the regulator.

The DPC alleges its concerns were “compounded” because no paperwork in the form of a Data Protection Impact Assessment (DPIA) was provided to it when Facebook informed it of the planned move.

The DPC also complained that it was given no documentation in relation to “the decision-making processes that were undertaken by Facebook Ireland”.

Facebook appeared to suggest, however, that it was not obliged to volunteer the DPIA when it initially notified the DPC of the dating service launch on February 3rd. It insisted on Wednesday night that the necessary impact assessment was “shared with the Irish DPC when it was requested”.

“It’s really important that we get the launch of Facebook Dating right so we are taking a bit more time to make sure the product is ready for the European market,” said Facebook, confirming it has postponed the launch of the service.

“We worked carefully to create strong privacy safeguards, and to complete the data processing impact assessment ahead of the proposed launch in Europe.”

The DPC said it visited Facebook’s offices on Monday in order to secure the necessary documentation.

“In order to expedite the procurement of the relevant documentation, authorised officers of the DPC conducted an inspection at Facebook Ireland Limited’s offices in Dublin on Monday last, February 10th, and gathered documentation,” said the DPC.

Facebook Ireland confirmed that the visit by the DPC was pre-arranged with company executives.

1 ‘I don’t need to do any of this. . .I don’t actually need to work.’
2 Basic income for all: Has the Covid crisis given us a new economic model?
3 Only way is up for Stripe as valuation skyrockets
4 Promontoria barred from pursuing doctor over Ulster Bank loan
5 Direct sea routes to Europe offer certainty in choppy Brexit waters
Real news has value SUBSCRIBE