US in an ideological and geopolitical bind over 5G infrastructure 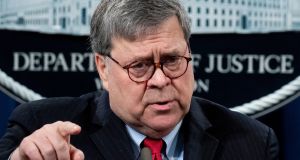 US attorney general William Barr: made a very socialist proposal for a very senior member of the GOP. Photograph: Michael Reynolds/EPA

American cellular mobile networks are delicate. If, like me, you are a reasonably frequent visitor to the US, then you will probably have been frustrated by weak or even absent wireless signals and frequent dropped calls when you do have a connection.

These experiences occur as much in the tech industry heart of Silicon Valley, or the world’s financial services mecca in Wall Street, as across the rest of the country.

European or Asian visitors to the US are often surprised by tired infrastructure, particularly of many airports, train stations, bus stations and highways. A fragile mobile network infrastructure adds to the impression of general demise.

It was nevertheless still astonishing that the attorney general in the Trump administration, William Barr, asserted in a major speech last week that the US government should consider taking a “controlling stake” in the European mobile telecommunications manufacturers Nokia and Ericsson. He suggested that this would both strengthen US mobile networks and thwart the global ambitions of China-based Huawei. Barr suggested that the federal government could do so directly, or via a consortium of US companies and private investors.

Yes, you read that correctly. The US should consider in effect nationalising two European companies. A very socialist proposal from a very senior member of the Grand Old Party.

The push-back against Barr’s proposal was swift. In his recent state of the union address, President Trump had already thundered that “here, in the United States, we are alarmed by new calls to adopt socialism in our country”. In a direct response to Barr’s proposal, the White House economic adviser Larry Kudlow immediately asserted that the US was co-operating closely with Finland’s Nokia and Sweden’s Ericsson on mobile networks but said the “US government is not in the business of buying companies, whether they’re domestic or foreign”.

The robust discussions apparent within the heart of the Trump administration are over the major improvements to mobile networks brought about by so-called 5G – fifth-generation – technology. Huawei is generally accepted to be a global leader in this new technology wave. It has 5G networks operational not just in China but also, for example, in Germany, Italy and Spain. In Ireland it has partnerships for 5G with both Eir and Imagine. President Trump was reportedly extremely forceful with UK prime minister Boris Johnson in a recent telephone call, furiously challenging Johnson’s decision in January to allow Huawei technology into parts of the UK 5G network.

Sweden’s Ericsson, Finland’s Nokia, and South Korea’s Samsung, all compete globally with Huawei for 5G equipment. Surprisingly, US vendors are generally absent from the 5G equipment market. US-based Lucent was once a global leader in mobile technology, but it merged with France’s Alcatel in 2006, and then the combination was acquired by Nokia in 2016.

Barr has asserted that he is pushing for US control of Ericsson and/or Nokia because he believes that the alternative strategy being considered by the Trump administration is not credible. A year ago the White House floated a proposal to build a government-owned national 5G network. More recently it was considering an initiative to design and build an “open architecture” for 5G networks in which different companies could compete for specific components, rather than a single comprehensive system from a single company such as Huawei. Barr, who once worked with the corporate legal team at Verizon (an American telecommunications vendor) for 14 years, believes this approach would take far too long to achieve a successful result.

Why the concern over Huawei as a vendor? The Trump administration has alleged there are security risks in allowing a core national infrastructure to be operated using a Chinese supplier. The Huawei chief financial officer, Meng Wanzhou, has been detained in Vancouver for over a year by the Canadian authorities, at the request of the US authorities concerned over Huawei’s activities in Iran. It might also be remembered that in 1992, during his term as US attorney general for the George HW Bush administration, Barr launched a secret surveillance programme to collect and archive the records of every international phone call made by the entire US public. Ceding core control of the national communications infrastructure to a Chinese company now would presumably threaten US surveillance capabilities.

The American challenge of the migration to 5G is the sheer capital cost of new infrastructure and software upgrades to the existing US networks. Providers such as AT&T and Verizon already have large debt burdens, not least due to previous costs from radio spectrum auctions. The Federal Communications Commission has decided to hold further public auctions for 5G spectrum, including the possibility of reimbursing satellite communications companies that have already licensed parts of that spectrum from the commission. The high costs of upgrades and debt levels place the US at a disadvantage to other jurisdictions where a new, fully integrated and complete 5G system from a vendor such as Huawei may be a far lower cost.

It may be some time before the US has a world-class mobile network infrastructure.