Insurance costs add €1 to every concert ticket in Republic

MCD boss says insurance costs for a stadium gig in Republic costs €50,000 compared to €5,000 in the North 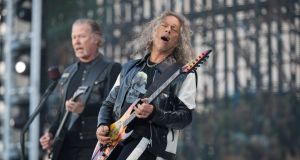 MCD’s ticket sales were boosted here last year by sell out shows such as Metallica at Slane (above). Photograph: Arthur Carron

Mr Desmond, chief executive of MCD Promotions, said the costs of staging shows continues to increase and that MCD’s annual insurance costs work out a €1 per concertgoer.

That is according to new figures from trade industry journal, Pollstar which show that MCD Productions is ranked 10th across the globe in the table of the world’s Top 100 Promoters.

Mr Desmond said: “We’re very happy to be in the top 10 globally and that our events attracted 2.3 million people - especially when you consider the population of Ireland.

MCD’s ticket sales were boosted here last year by sell out shows by Westlife at Croke Park, Hozier selling out the 3Arena over two nights, Metallica at Slane and the sell out Electric Picnic.

The Pollstar figures show that the average cost per ticket for MCD events last year was $69.22 (€62.71) and Mr Desmond said “if you look at the average price of tickets, tickets here are no more expensive that anywhere else even though the costs for artists performing here are higher than the likes of mainland Europe”.

He said the higher costs arise from the logistics of shipping equipment here where a one night gig takes three days operationally and a two date performance takes four days from a logistical point of view. According to Mr Desmond, artists take the hit in increased costs with the extra day because they love playing to Irish audiences.

He predicted MCD audience numbers won’t be as high in 2020 due in part to stadium availability because of the Euro 2020 matches taking place at the Aviva and elsewhere in the UK that stops artists doing stadium tours.