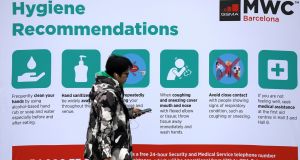 Mobile World Congress, the premier mobile industry conference, was cancelled by its organisers over concerns about the spread of the coronavirus. Photograph: Reuters

The news was confirmed on Wednesday evening and comes after a large number of well-known companies announced their withdrawal from the event, which takes place in Barcelona in late February.

BT, Vodafone, Orange and Deutche Telecom were among the companies on Wednesday to confirm they would no longer be at the congress.

They joined the likes of Intel, Facebook Ericsson, LG, Amazon, Nvidia and Sony who had earlier withdrawn from this year’s event.

Other companies, such as Huawei and ZTE had still been planning on attending MWC, albeit with a downsized delegation that would not include Chinese employees.

“With due regard to the safe and healthy environment in Barcelona and the host country today, the GSMA has cancelled MWC Barcelona 2020 because the global concern regarding the coronavirus outbreak, travel concern and other circumstances, make it impossible for the GSMA to hold the event” John Hoffman, the chief executive officer of conference organiser GSMA, said in a statement.

GSMA had tried to hold out against pressure to cancel the annual gathering by this week implementing restrictions including barring all visitors from the Hubei province in China, where the coronavirus first emerged.

In addition, all attendees who have been in China recently had been told they needed to provide evidence that they have not been in the country for 14 days prior to MWC kicking off on February 24th.

As if that weren’t enough there was also to be widespread temperature screening, while a “no-handshake” policy was also being advised.

A number of Irish tech firms were planning to attend MWC, most of them with Enterprise Ireland, which hosts a large pavilion for around 12 companies each year.

The cancellation comes as research firm IDC warned that a projected 6 per cent increase on ICT spending to $5.2 trillion this year could be at risk due to the coronavirus.

China was forecast to post IT spending growth of 12 per cent this year, up from 4 per cent in 2019, but the impact of the coronavirus, which began in the Hubei province, looks likely to inhibit this growth, IDC said.

Canalys this week also warned that the coronavirus will likely upset sales in China’s smart device market, leading it to dramatically revise its forecasts.

The research firm, which previously predicted a 7 per cent decline in smartphone sales and an 8 per cent drop for PCs, is now forecasting a 40 to 50 per cent fall and a 20 per cent dip respectively.