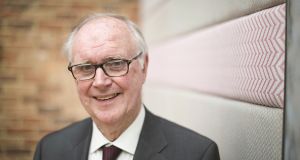 Legendary Dublin-born retailer Arthur Ryan, the driving force behind the global expansion of Irish fashion group Penneys/Primark, who died on Monday at 83.

Irishman Arthur Ryan, the driving force behind the phenominal global growth of Penneys/Primark retail chain over more than 40 years, has died at the age of 83. Business leaders paid tribute to the Dubliner, who was a legendary figure in Irish the fashion industry. Barry O’Halloran reports.

Deirdre McQuillan outlines Ryan masterminded the retail chain’s rise from small beginnings in Mary Street with a “pile them high and sell them cheap” mantra, into a major international player.

Six years after Max Schrems launched his privacy battle against Facebook, the Austrian campaigner returns this morning to Europe’s highest court for a second time. Derek Scally has the details of this long-running saga.

Deutsche Bank’s 750-strong workforce in Ireland are set to escape the worst of a global staff cull after the embattled German bank moved on Sunday to unveil its biggest restructuring plan in two decades, according to sources. Joe Brennan reports.

Dublin-based executive recruitment company Merc Partners has been acquired by Spencer Stuart, a US company with more than 60 offices globally, writes Peter Hamilton.

Is your mobile phone being increasingly clogged up by news alerts from media companies? In our weekly media and marketing column, Bernice Harrison looks at this growing trend and wonders if people are actually paying any notice to them.