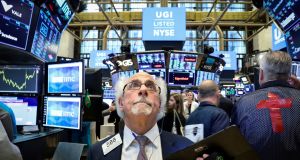 The New York Stock Exchange. US stocks were lower in early afternoon trading on Wall Street, pressured by a more than 2 per cent drop in shares of Apple. Photograph: Brendan McDermid/Reuters

European shares closed slightly lower on Monday as a massive restructuring plan announced by Deutsche Bank weighed on the wider financial sector and markets remained subdued on dampened hopes of a hefty rate cut by the US central bank.

Upbeat US jobs data last week put off bets that the US Federal Reserve would give in to calls for aggressive policy easing.

“Ordinarily, a strong set of employment data would lift global equity sentiment, but seeing as a large portion of the rally was driven by the belief that the Federal Reserve will cut rates this month, equity markets are broadly lower today,” CMC Markets analyst David Madden said.

Property plays in Dublin were broadly lower, amid concerns over the outlook for house prices. Cairn Homes dipped 1.3 per cent to €1.19 and Glenveagh Properties declined by 0.9 per cent to 75c.

“House price inflation has slowed due to Central Bank of Ireland mortgage rules, but the pressure of housing demand on supply has not, evident in a 7 per cent rise in rents through 2018,” said Conall Mac Coille, an economist with Davy.

Providence Resources added 3.7 per cent to 11c on news that $10 million due from Chinese backer APEC Energy Enterprises to its Barryroe project off the Cork coast had come through.

UK blue-chip index edged 0.1 per cent lower in its third session of losses – its longest losing streak in two months, while the midcaps fell 0.4 per cent as a weaker sterling also weighed on its domestically-exposed constituents.

Imperial Brands helped contain the losses on the blue-chip index, adding 2.2 per cent after the tobacco company announced plans for a £200 million buyback and said it would revise its dividend policy. Rival British American Tobacco rose 1.5 per cent.

Losses in the blue-chip index were spread across sectors, with pharmaceutical companies and banks most hit.

Miners, however, snapped a three-day losing streak on the back of higher copper prices. The sub-index had slipped last week after China’s top steel mills formed a group to probe a record surge in ore prices.

British Airways owner IAG lost 1.4 per cent on news that it was facing a record £183.4 million fine from the UK’s Information Commissioner’s Office for the theft of data from 500,000 customers from its website last year.

Deutsche Bank erased earlier gains to fall 5.4 per cent to €6.79 after the German lender unveiled plans to restructure its business. Some analysts said challenges for the bank remain and noted the new profitability targets may be too ambitious.

US stocks were lower in early afternoon trading, pressured by a more than 2 per cent drop in shares of Apple and as investors toned down expectations of an aggressive interest rate cut by the Federal Reserve later this month.

Apple was hit as Rosenblatt Securities downgraded the iPhone maker’s shares to sell from neutral, and said it expected the company to face “fundamental deterioration” in the next six to 12 months.

Boeing shares fell after Saudi Arabian budget airline flyadeal said it would not proceed with a provisional $5.9 billion order for the planemaker’s grounded 737 MAX aircraft, instead opting for a fleet of Airbus A320 jets. – Additional reporting Reuters