Stressed out: the system is broken and needs a radical fix 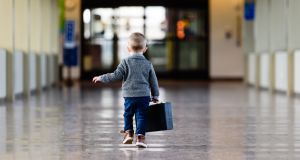 Many studies, including at least one by Nobel prize winners, suggest that human happiness peaks at levels of income far below those of the successful lawyer and banker

One of the many ways in which Ireland is marked by echoes of its colonial past is the separation of the legal profession between solicitors and barristers. Those of us of a sceptical nature look at the expense involved in most, if not all, aspects of the law and wonder if professional codes of practices aren’t doing just what their medieval inventors intended. Those costs and the associated rewards, at least for those at the very top, can be eye-watering.

But there probably aren’t many Irish firms of solicitors who match the current starting salaries of newly qualified legal-eagles in London. There, the so-called magic circle of law firms now offer freshly minted solicitors a base salary of £100,000 (€112,000) a year. One firm is reported to have upped the ante to £140,000.

Gender pay gaps are as legendary as the working hours that go with those salary packages. One giant US firm with about 430 equity partners pays each of them an average of just over $5 million (€4.5 million) a year. The first of the annual reports of the magic circle in the UK has just revealed a more modest £1.62 million paid to each partner.

As well as the pay, culture at some of these firms is similar to that of an investment bank. Annual culls of underperforming lawyers are as brutal as they are widespread. US financial firms have a curious habit of adopting military acronyms for this: when they are engaged in a “rif” they are not playing air-guitar but rather a “reduction in force”. Some lawyers explain the pay gaps between men and women in terms of relative willingness to embrace the culture in general and the hours in particular. My recent glimpse of the mini-hotel contained within one steel and glass tower in the City of London was consistent with the widespread belief that some lawyers are often expected to spend days on end in the office.

In one sense, all of this simply reflects the winner-takes-all phenomena observed in many industries and professions. Entertainers, tech company owners, sports people and many others all exhibit a pyramid of reward structures. Many try but few reach the heady heights of the premiership footballer or equity partner.

An economist would say that all of this is fine provided it is the end result of market forces; that there are no monopoly or other restrictive practices. Non-economists would say good luck to the footballer or musician but too many other rewards are obviously the result of the system being rigged in some way or the other.

One curious feature about the fierce demand in London and elsewhere for junior solicitors is the absence of the effect of robots and artificial intelligence. For years now we have been told that automation is increasingly moving up the value chain and even the professions, including the law, are vulnerable. Robots are part of every story about the future of work but are making few dents in employment data or lawyers salaries. Not yet anyway.

A less than obvious question, perhaps, is why would anybody choose a career in, say, corporate law? The trivially obvious answer may, indeed, be the right one. Follow the money. It may even be an interesting job and, in non-monetary ways, be a rewarding career. Hanya Yanagihara, in her celebrated but unrelentingly grim novel, A Little Life, tells the story of one lawyer who profoundly disappoints his idealistic law professor father by becoming a (hugely successful) corporate lawyer. It’s fiction (and not just about the law) but horrible. Particularly if it bears any relation to the truth.

This is not to single out corporate law (and apologies to my lawyer friends who are happy with the choices they have made). It’s more a general question about why people do what they do and how to make early career choices in a rigged, winner-takes-all world that, in any event, will supposedly see most employees replaced with machines. Add in the fact that most careers depend on luck as much as anything else for their ultimate success, or otherwise, and we have the narrative of today’s millennial: if we don’t make the right choice, get lucky, have a miserable working life, we won’t be able to afford a house or a pension. These aren’t the same choices – the same chances – given to their parents.

Whether or not we agree with this narrative in its entirety – I don’t, for what it is worth – it is widely repeated and believed. There is enough of it that is true to at least partly explain the populist surge. Or, at least, to suggest that the system is broken and needs a radical fix.

But it would help if we taught that while poverty is indeed best avoided, the need for cash is not necessarily infinite. Many studies, including at least one by Nobel prize winners, suggest that human happiness peaks at levels of income far below those of the successful lawyer and banker. The paradox that I observe all the time involves stressed out, rich, miserable, successful corporate types who want their children to be just like them.