Carney the early front-runner as Europe’s candidate for IMF 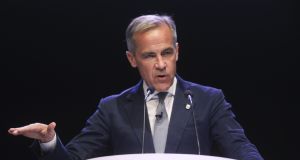 Mark Carney: he has run the Bank of England since 2013, and is scheduled to leave at the end of January. Photograph: Simon Dawson/Bloomberg

European governments are actively discussing nominating Bank of England governor Mark Carney as the next head of the International Monetary Fund, according to a person familiar with the matter.

While a Canadian by birth, Mr Carney holds British and Irish passports, so his selection would technically preserve the seven-decade practice of a European running the Washington-based lender. The Bank of England declined to comment on his behalf.

The IMF’s last 11 managing directors all came from Europe, including Christine Lagarde of France, who is set to step down after this week being picked to become president of the European Central Bank once Mario Draghi leaves on October 31st.

European rivals to Mr Carney could still materialise. European Union finance ministers may try to settle on a single name to nominate at a meeting scheduled for the start of next week, according to another person familiar with the matter.

Mr Carney is clearly a qualified candidate but there are others too, the person said.

Emerging-market nations may also push for a representative to get the role given the increasing weight they now play in the world economy.

The 54-year-old Mr Carney’s resumé is hard to beat though. He has governed the central banks of both the UK and Canada, helped set regulation for global finance, worked inside the Canadian government, earned a doctorate in economics from the University of Oxford and spent more than a decade at Goldman Sachs.

Such experience matters given the IMF leadership will pass hands at a time when the world economy is the weakest in a decade and increasingly threatened by the trade war between the US and China. Just this week Mr Carney warned of the risks of a “widespread slowdown” that may require a major policy response.

He has run the Bank of England since 2013, and is scheduled to leave at the end of January, having twice extended his tenure to help manage the economic fallout from the UK’s vote for Brexit.

As well as setting interest rates, he chairs its financial policy committee and has overhauled how the central bank runs.

The UK government is already searching for a successor among 30 applicants although the process is not currently set to be completed for a while and certainly not until after a new prime minister takes office this month.

From 2011 until last November, Mr Carney chaired the Financial Stability Board, an international body tasked with strengthening the international financial system after its 2008 crisis. That saw him work at close quarters with world leaders such as German chancellor Angela Merkel, who would have to sign off on his candidacy for the IMF.

He was the governor of the Bank of Canada for five years, and also previously worked as the Canadian government’s sherpa to the Group of Seven economies.

He entered policymaking after spending 13 years at Goldman Sachs in multiple cities and in areas such as sovereign risk, emerging markets and investment banking.

Mr Carney had signalled that he planned to return to Canada in early 2020. He has been repeatedly mentioned in the Canadian media as a possible successor to prime minister Justin Trudeau, who faces an election in October.

His possible move to the IMF instead could disappoint former chancellor of the exchequer George Osborne, who hired Mr Carney for the Bank of England. He is considering a bid for the IMF himself, according to a person familiar with the matter.

Other challengers could include French finance minister Bruno Le Maire and ECB executive board member Benoit Coeure, although they may suffer from Ms Lagarde and her predecessor, Dominique Strauss-Kahn, both being French. Bundesbank president Jens Weidmann has ruled himself out.

Emerging-market countries have made a pitch before, only to split over who to support and then lose out. Ultimately, though, that is because the US backed the European candidate as part of the unspoken pact that leaves the World Bank presidency in American hands.